US firm not 'dominant' enough for landmark skyscraper 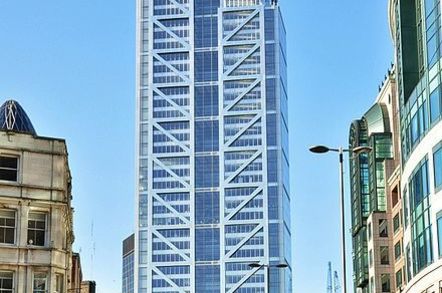 The City of London has slapped down Salesforce and banned it from changing the name of a prominent skyscraper.

The cloud computing firm is based in the Heron Tower, near Liverpool Street, which it had wanted to rename the Salesforce Tower.

But at a meeting today, politicians voted against the plan and instead decided to call the building 110 Bishopsgate.

Salesforce only rents six of the building's 46 floors, which made its bid the change the name unpopular among other tenants.

In a briefing note (PDF) ahead of the vote on the name change, the City of London Corporation said Salesforce "is becoming a large new occupier but will not be sufficiently dominant to justify an authorised building name".

Powa Technologies, a global retail technology specialist, is based on floors 34 and 35 of the Heron Tower. It is a firm that appears considerably more modest than Salesforce and was dead set against plans to change the name of the building.

Dan Wagner, Powa Technologies founder and CEO, said: “This is a victory for the City of London and for common sense. The Committee had never before been asked to rename a building for a commercial tenant that was not the sole occupier, and we are pleased that they did not set an unpopular new precedent here.

“This milestone decision will protect the integrity of the City’s landmark buildings. Other businesses will also now be safe from the difficult situation of having the prestige of their offices devalued by being named after another company.” ®