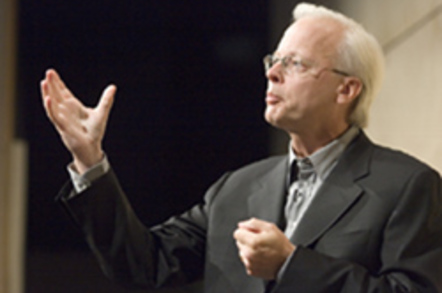 Software guru Ray Ozzie, once billed as Microsoft’s “next Bill Gates” before he left Redmond, has risen once more – in startup mode.

Lotus Notes inventor Ozzie, who left Microsoft in 2010 after four years as the giant's chief software visionary, took his new startup Talko public today. Ozzie has been working on Talko since 2012, but details were scarce.

Talko is a cloud-based voice collaboration app that uses VoIP to run calls between parties, with the app recording the entire conversation and storing it on Talko’s servers.

Users can create bookmarks and tags for points in the conversation. Follow-up calls can be linked to and accessed by other team members and they can add text and photos, too.

The company has funding from Andreessen Horowitz, Greylock Partners and Kapor Capital.

The app is just for the iPhone - and will be for some time, the company reckoned. Sorry, no concessions to Ozzie’s ex-employer Microsoft with its Windows Phone OS.

According to Ozzie, the phone rather than the PC is at the centre of our communications today. Also, he reckons, the sands are shifting out from under the document as the primary medium that is used in collaboration – quite a contrast with his former employer's approach.

As for the phone, however, Ozzie reckons the phone call itself “is stuck in the past” and every so-called innovation we’ve had around the phone - visual voice mail, VoIP and web calls – haven't moved things along.

Talko, he promised, will change that.

Talko is Ozzie’s third startup, his most recent being GrooveNetworks – which he started in 1997, also in the field of collaboration – and which was later bought by Microsoft in 2005.

Groove provided Virtual Office for workers to share information, manage projects and hold meetings regardless of their location. Groove was folded into Microsoft's Exchange.

Ozzie was named chief software architect at Redmond in 2006, ultimately taking over software strategy from Bill Gates, who stepped aside in 2008. Ozzie was admired by Gates, but seemingly lacked the corporate traction or clout to push Microsoft to change the way he believed it should. He left in 2010.

Ozzie is best known, however, as the inventor of Lotus Notes – the document collaborating and sharing platform that became an enterprise standard. Microsoft invented Exchange to try to kill Lotus Notes - a battle it's still waging.

Ozzie founded Iris Associates, which was bought by Lotus Development Corp, which developed and sold Lotus Notes until it was bought by IBM in 1995.

Based on his past form, it would seem just a matter of time before his latest venture gets bought and Ozzie once more becomes the employee of a corporate tech giant serving the needs of enterprise customers. ®