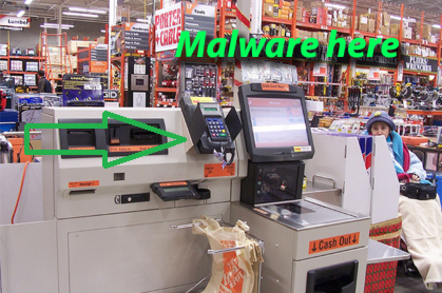 Home Depot is facing claims it ignored security warnings from staff, who say prior to its loss of 56 million credit cards, it failed to update anti virus since 2007, did not consistently monitor its network for signs of attack, and failed to properly audit its eventually-hacked payment terminals.

Former unnamed security staff told the paper they were so concerned of the poor state of IT systems that they warned their friends to 'use cash' instead of credit cards.

They further contended the organisation ran a Symantec anti-virus product dated 2007 (it was unclear if the signature database was updated) and that executives rejected requests to improve the state of security.

The failings if true appear to place Home Depot in breach of PCI DSS which require regularly third party audits of security systems protecting card data. The Council has been asked for comment.

Home Depot was this year planning to deploy encryption across its payment systems and to roll out EMV credit card security but those projects came too late to stop the breach.

In 2012 Home Depot hired and promoted Ricky Joe Mitchell within its security ranks before he was in April sentenced to four years prison for performing a factory reset on his former employers' servers.

Some estimates suggest the stolen credit cards being flogged online could resulting $3 billion in fraud.

Last week Home Depot admitted malware infected its PC-powered tills which were thought to be the self-checkout registers. ®

Three alleged ringleaders nabbed in EU, indicted in US