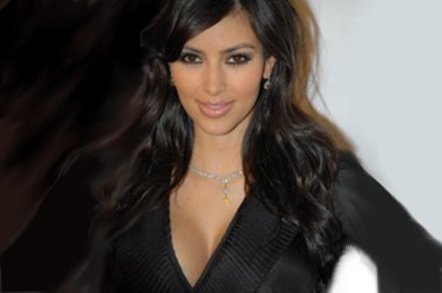 A new round of what appear to be private, naked photos of female celebrities including US television reality star Kim Kardashian have apparently been leaked online.

The latest stash of pics, which seemed to include two naked selfies taken by Kardashian with a Blackberry handset, were easily accessible on Twitter late on Saturday night.

Anyone entering the word "Kim" on the micro-blogging site could see the alleged images.

However, Kardashian's representatives are yet to confirm whether the photos - which appear to show the star who is married to Kanye West candidly posing for two separate selfies in a bathroom - are real or fake.

The reality TV star isn't the only celeb caught up in what is claimed to be the latest leak of private photos hacked into by miscreants, who then exchange the images on anarchic message board 4chan.

According to TMZ, nude photos of other stars including Vanessa Hudgens and Hope Solo have also apparently been leaked online.

Lawrence was among 100 stars to have had their private photos hacked into earlier this month.

It was claimed at the time that hackers would leak more naked pics of female celebs.

As The Register reported, the photos were rumoured to have been stolen from various cloud backup accounts linked to Apple iPhones, Google Android devices and Windows phones.

Hackers used brute-force password guessing against iCloud accounts which Apple later confirmed had occurred on a limited basis, among other techniques, to harvest the data.

So what of Kardashian's Blackberry, then? Some have suggested that the alleged naked selfies could be a few years old and that the photos may since have been uploaded to a cloud service. If the pics prove to be real, they appear to show Kardashian posing without a wedding ring.

She got hitched to West this year.

Kim Kardashian nudes leaked. The only thing I've never seen in those photos is a new Blackberry.

Those Kim Kardashian pictures have to be at least 5 years old. Like she'd have an old blackberry now

More shocked about the fact that Kim Kardashian used a BlackBerry to take her nudes, not a suprise that they leaked

Others have wondered what all the fuss is about, given that Kardashian recently posed nude for GQ magazine. Instead, the Twitterati seems somewhat fixated with the celeb's choice of phone. ®