A spin of roulette in the sporty Ford Fiesta Black

With colours to match card suits, is it worth a gamble? 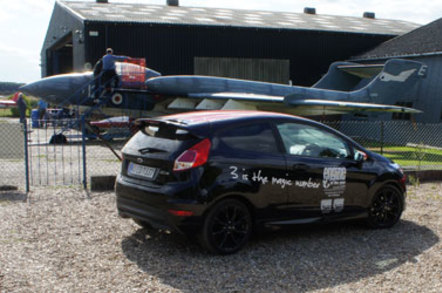 Vulture at the Wheel A car is either a head or a heart purchase. If you look at numbers and depreciation, you buy a BMW. Emotion and passion, on the other hand, stereotypically leads to an Alfa Romeo. The new Fiesta Red and Black editions try to be both. It comes it the two colours favoured by roulette, so we took it for a spin.

The car we tested was black, and while the model is known as the Red and Black edition that’s ungainly and involves twice as much typing. So, from now on, I’ll call it the Fiesta Black and you can assume that the same goes for the #ff0000 version.

It’s a Fiesta, so a good sensible hatchback, but it’s sporty. It has boy racer looks but it’s not the 1.6 litre 180 bhp ST, the flagship sporty model. What it does have is the three cylinder – hence the garish graphics on the review car – one litre 138 bhp turbocharged engine. That makes it quick (ish) and economical.

It also means it has the highest output per cubic centimetre of any car in current production. That delivers a 0-62mph figure of 9.0 seconds and top speed of 125mph while emitting 104g/km of CO2 and managing a urban cycle of 63mpg. This black car is so green you only pay £20 a year in car tax.

It’s an exceptionally clever engine but doesn’t quite have the exuberance of the Fiat Twin Air. The EcoBoost feels a little more grown up which is not necessarily A Good Thing. Particularly in this application where you feel you should be wearing a baseball hat backwards to drive it.

The two-tone colour scheme inside and out defines the car with a contrasting ring around the grille and wing mirrors. The Fiesta is a fundamentally attractive car, although the grille is too Aston Martin.

I regularly glimpse a Fiesta and think “Cygnet”. It’s really rather smart and the attractive 16” wheels complement it well. It’s not just the roof spoiler which tells everyone that this is a sporty car. 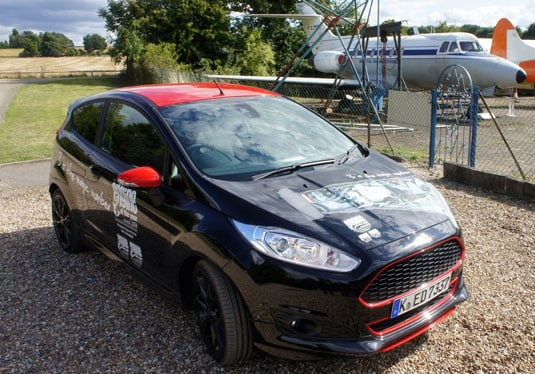 It’s more boy than racer, far from being a stripped back track warrior, it has keyless go – like the Tesla, you just need to press the start button on the fob in your pocket. And it has automatic stop start: pull to a halt and disengage the gearbox and the engine stops.

This is all done in the name of fuel economy and every bit as annoying as when you go for a coffee and find your laptop has gone to sleep. Compared to other auto-stop cars, the Fiesta is particularly aggressive and kills the power with little delay after pulling to a halt. It's a £200 option, so would need to save a lot on petrol-guzzling to justify itself.

Fortunately, there is a small black button on the control panel to disengage this. And a little green light flashes up to let you know that you have switched the thing off. 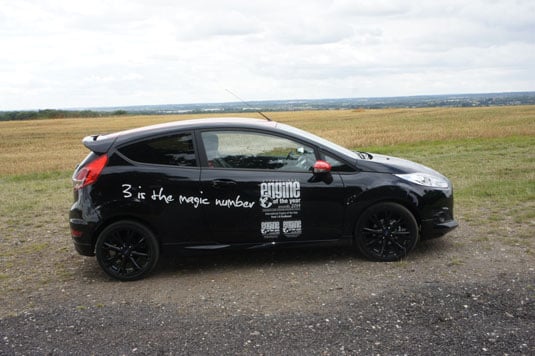 Connectivity is good. Bluetooth sync works reasonably painlessly and there are sockets to plug in and charge devices with USB and audio. 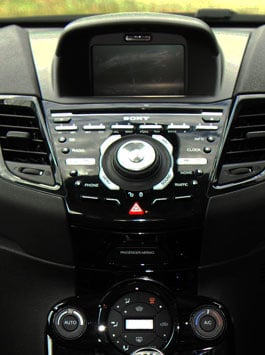 The dashboard has choc-a-block buttons

What dominates the interior is the centre console. It has more buttons than a Cadbury’s factory and they are scattered in all sort of places.

The user interface is amazingly confusing. To enter names into the sat-nav you have to cursor left and right. I kept using the (mechanically really rather nice) rotary dial which would have been far quicker but that is reserved for volume.

There is no logic in the button positioning. Smack in the middle with all the information and entertainment systems is a padlock button, which locks the doors.

There are soft keys, like a 2001 Nokia Series 30 phone. The (small) screen has legends which refer to unlabelled keys but these are right at the bottom of the panel with a vast row of buttons muddled in between.

Mechanically, this is necessary because you can’t be expected to lean forward too close to the display to do the jobs necessary. There are no dedicated “back” or “home” buttons. It’s all a cognitive nightmare.

Now, this doesn’t matter too much in a car you might buy, but this is a standard Ford dashboard and it’s going to be impossible to sell into the hire car market.

To top the UI issues off, the mix of fonts looks like the programme from a school fête produced in the early days of Desktop Publishing. The whole approach is discordant. 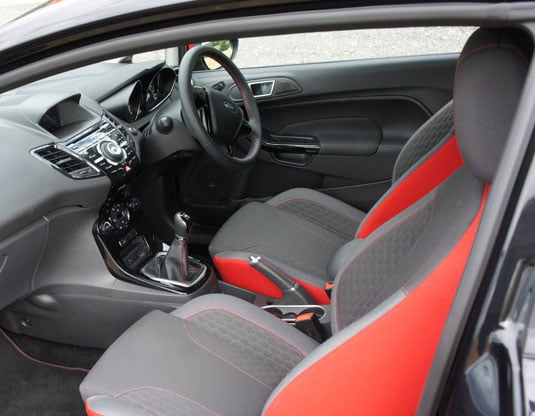 The seats hold you well

Which is a shame because the user interface that really matters – the one between your backside and the road – is really rather good.

Next page: Button up
Page:
Tips and corrections
21 Comments

Alfa Romeo Giulietta Quadrifoglio Verde: Fun, but not for all

Alfa Romeo MiTo Quadrifoglio Verde: Less fun than it should be

Vulture at the Wheel Seduced by a sexy Italian

Vulture at the Wheel Squint and you can see the future

Scanning an Exchange server for a virus that spreads via email? What could go wrong?

Who, Me? Techie gets away with it by saying 'I Love You'