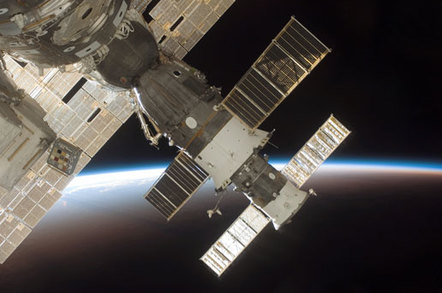 Data gathered by the International Space Station's (ISS') Alpha Magnetic Spectrometer (AMS) is being cautiously suggested as useful evidence for the existence of dark matter.

The AMS is a particle detector on the ISS and keeps its eyes on cosmic rays, in order to observe the high-energy particles they carry. As explained in a new piece in Physical Review Letters titled Electron and Positron Fluxes in Primary Cosmic Rays Measured with the Alpha Magnetic Spectrometer on the International Space Station, since May 2011 it has detected and analysed 41 billion items of interest. Of those, 580,000 were positrons and 9.2 million were electrons.

When the boffins involved calculated “the positron fraction” — the ratio of the number of positrons to the combined number of positrons and electrons they found a higher fraction at lower energy levels. That's not been observed before, leading Paolo Zuccon, an assistant professor of physics at MIT, to comment the results “show unambiguously that a new source of positrons is active in the galaxy.”

That's a long way short of a positive identification of dark matter, but clearly enough for the boffins concerned, and reputable journals, to suggest it is a useful step towards such a proclamation. ®