A good day for privacy as invisble.im also reveals its approach to untraceable chats 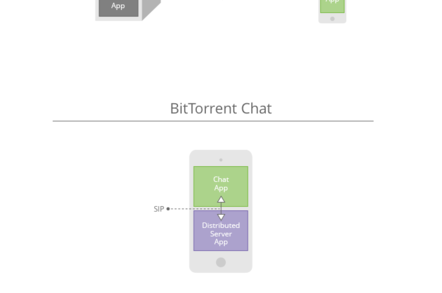 Bleep, the BitTorrent peer-to-peer chat client, is now out in the wild in the form of a public Alpha version.

First released to registered pre-alpha users in July, Bleep was then in Windows versions only. Now it's gone to release, the organisation has added Android and Mac versions.

As BitTorrent explains here, Bleep lets users sign up with e-mail or mobile numbers, or in an incognito mode with no personally identifiable information.

By eliminating servers between communicating devices and encrypting conversations end-to-end, Bleep hopes to offer better privacy than chat applications from the big names – or, for that matter, than SMS which gets stored and forwarded by telcos.

On Android, Bleep is recommended for WiFi connections only, because it's currently a data-hungry application (it's also battery-hungry, something the development team says it's working on). Other outstanding issues at the moment include the inability to send messages to contacts that are offline; messages can be moved from desktop accounts to Android, but not in the other direction; sent messages can't be seen on multiple devices (but received messages can).

The devs are also working to improve the robustness of presence-sensing, they say, along with consistent call quality.

Another project with a similar aim also debuted today, as invisble.im announced that it will use the Ricochet serverless messaging platform developed by John Brooks.

invisible.im aims to create a messaging platform that leaves no metadata traces, making it much harder to track conversations between whistleblowers and journalists.

Founder Patrick Gray says he doesn't expect the tool to be NSA-proof, as "running Ricochet on your box isn't going to stop the NSA owning you sideways with 0day if you're a legitimate target. But he hopes invisible.im will mean "... it requires difficult, time consuming, and targeted effort to identify Ricochet users' associations and intercept their chats" and " make retrospective identification of leakers by lesser agencies (state police, for example) more or less impossible." ®