One lane for the afflicted, another for pedestrian pedestrians 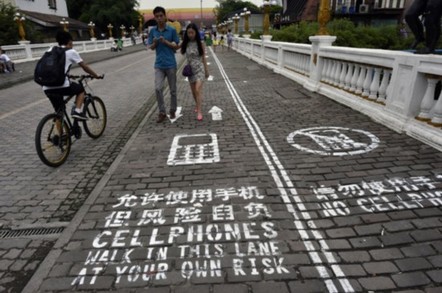 China's fifth-largest city, Chongqing, has decided to help out smartphone addicts by devoting a chunk of footpath so they never need to look up from their screens as they walk around.

As anybody who's collided with a mobe-stroking pedestrian (or, for that matter, anybody who's ruined their Candy Crush score by striding into a lamp-post) will know, a fascination with your smartphone while you're walking around is a danger to yourself and others.

Earlier this year, Australian boffins went to far as to quantify the effect.

Chongqing is skipping the research and has cut straight through to its solution. According to the People's Daily, there's now a segregated footpath near the scenic spot of Yangrenjie.

The 50 metres of segregated sidewalk tries to put pedestrians with their wits about them on one side, and mobile users on the other.

The footpath has attracted the attention of tourists, who are reportedly taking photos of it (probably with smartphones), but the People's Daily report says so far, the regulation is largely ignored. This makes sense to Vulture South: clearly people who are likely to collide with others while using their phones probably haven't noticed the markings that direct them to stay on one side of the pavement.

“Someone even parked a car on the sidewalk”, the report continues. ®