At least Apple can concentrate on TWO handsets 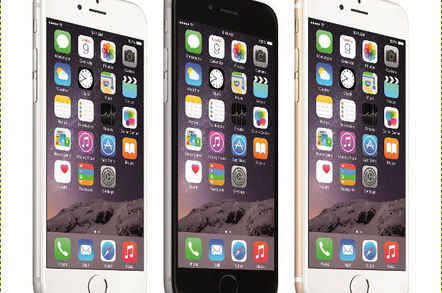 Analysis Apple unsurprisingly revealed a new iPhone that'll come in two sizes for the first time: the regular iPhone 6 features a 4.7-inch 1334x750p screen, while the Plus version boasts a 5.5-inch 1080p screen.

Both models now feature the Retina marketing tag, but while the hardware might not be revolutionary, Apple’s new iOS 8, available on 17 September, may prove the boost that NFC payments need to take off.

Now that the iPhone has leapt past the 4-inch screen size for the first time, Apple is now on a par with the other Android flagships when it comes to both screen resolution and size – with the pixels per inch coming in at 326 and 401 respectively. Apple promises improved battery life, thanks to a bigger battery and more efficient performance, although it hasn’t released details of the battery’s size.

For us this announcement is one of catch up, and people will prefer Apple devices because of the brand, and we do not think this launch will win it any new friends. That doesn’t mean the new devices won’t sell – they will, as replenishments for older iPhones and for those who have been saving up to join the Apple band-wagon, but the spec won’t convince anyone afresh.

Notably, Samsung has already begun releasing phones with 1440p displays, and the days of Apple releasing industry-leading tech are well and truly over. Instead, Apple is selling itself on the best "user experience" – something it has always claimed and which it has control over, given the incredibly small amount of handsets it has to develop for, unlike Android’s comparatively fractured ecosystem.

However, many internet-pundits are panning the new iPhone, given that Google’s 2012 Nexus 4 had many of the same features that the new iPhone has.

A new A8 64-bit processor powers both handsets, which Apple says provides 50 per cent more GPU power and 25 per cent more CPU to the new phone. The M8 sensing coprocessor now features elevation and air pressure data, which will play into a new Health app.

The A8 uses the ARMv8-A instruction set, with a clock rate of 1.4GHz, cast in 20nm. Produced by TSMC, the GPU has been rumoured to be a PowerVR Series 6 G6630, from Imagination Technologies. The A8 is paired with 1GB of DDR3 RAM, which is half of what the flagship Android devices are shipped with.

Other features include a new camera design, but only an 8 megapixel sensor, with HD image capture as default and a five element lens that promises to take quality photos. 802.11ac Wi-Fi should allow downloads up to 3 times faster than the 5S, and Wi-Fi calling has been introduced – which could worry operators over the course of the next few years, as full native Wi-Fi communication could see handsets move away from cellular networks if Wi-Fi coverage and capacity improves sufficiently. If mobile phones shift to a Wi-Fi-first approach, the cellular operators may need to renegotiate their place in the market with the handset vendors and build out their Wi-Fi coverage to keep ahead – although anything like a handset manufacturer bypassing an operator seems a long ways off right now.

To compensate for the increased screen size, iOS 8 has introduced a one-handed interface that allows users to operate the rather large phones with just one hand. Apple has also opened up the TouchID finger sprint scanner to third party apps, and has allowed third party keyboards to be used for the first time. Its own new context-adaptive keyboard has been introduced, but the most significant feature seems to be the new NFC Apple Pay feature.

Apple Pay is the company’s first foray into NFC payments. Apple hasn’t just added the feature for third party apps to use; instead it has crafted a potentially very powerful ecosystem around it, authorised by the TouchID fingerprint scanner and running through the Passbook app. As Apple has somewhere in the region of 800 million credit cards linked to Apple iTunes and App Store accounts, it has the potential to become the biggest NFC player in the game almost overnight – if consumers choose that method for payments.

Apple’s experiments with using iBeacons in its stores hinted at the potential for turning an iPhone into a wallet. In its trials, a user could walk into an Apple store and be welcomed by the Apple Store app – which could then push product information to the customer based on their location within the store. After, for example, browsing a selection of headphones and reading online customer reviews through the app, the customer could then pay for the headphones through the app (already linked to their Apple ID credit card details) before being issued with a digital receipt and leaving the store – all without interacting with a single member of staff.

If that model can be expanded to other retail chains, the potential for change within the retail industry is huge. Similarly, if NFC support with Apple Pay now allows people to pay for their groceries via their Apple account, Apple’s products suddenly become a much more integral part of a consumer’s spending habits – becoming akin to the actual credit card.

Apple Pay is only available in the US currently, backed by Visa, MasterCard, American Express and six US banks. The NFC payment feature is currently supported by 220,000 outlets in the USA, with the likes of Macy’s, Walgreens, Whole Foods and McDonald’s allowing users to pay via iPhone.

The Apple Pay API will also be released to developers, and Groupon and Uber have already declared that they will build support for it into their apps. Apple may have come late to NFC, but it has had the balls to put it into its flagship product, which bodes well.

Other big additions are the Health and HomeKit functionality. The Health app promises to work with third party hardware, such as fitness wearables, to provide an interactive view into your own "quantified-self" data. Similarly, HomeKit will allow users to control third-party smart home hardware, which combined with Siri could give homeowners a voice-controlled home – although Apple’s launch event focused on the new hardware, to the detriment of learning more about the intricacies of iOS 8.