Scottish independence: Will it really TEAR the HEART from IT firms?

You keep the call centres, Hamish, we'll take the banks 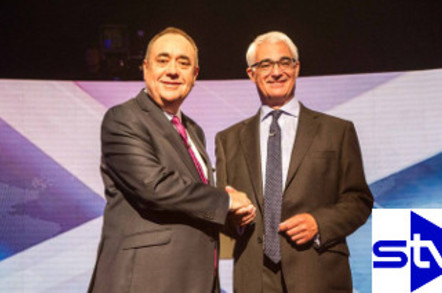 Scots may vote to leave the United Kingdom, ending a union lasting 307 years, on 18 September. Until a few weeks ago, the referendum on independence looked like an easy win for those wanting to stay in the union - or to use the parlance of the campaign, "no" voters.

But a surge in support has put those planning to vote "yes" to independence ahead in an opinion poll for the first time.

What does Scottish independence and the break-up of the United Kingdom mean to businesses, specifically those in and served by the sector you work in – tech? Some have been reluctant to express a view in public.

"BT awaits the outcome of the Scottish referendum," said a spokesperson for the company that may be about to become the main provider of telecoms infrastructure to both a downsized UK and an independent Scotland. "Whether there is a yes or a no vote, we don't anticipate making any substantive short-term changes."

Away from the spotlight and buried in the pages of the company's 2014 strategic report, though, BT has been a little more forthcoming.

"Inevitably, there are uncertainties in terms of the impact to BT should Scotland vote in favour of independence in September 2014," BT said, but beyond adding it has "performed a high-level risk assessment" and will continue to monitor things, that was it.

Others have been more candid in expressing their concerns - albeit anonymously, to researchers. A survey by trade association ScotlandIS of 220 businesses found that 36 per cent would consider relocating in the event of independence and 22 per cent would expect some decrease in sales, with just eight per cent anticipating an increase.

Why does that matter? Analysts IDC and Gartner, to whom we'd usually look in order to slice and value markets, haven't yet run the numbers on Scotland's IT spend or its value. They are still working at the UK-wide level.

The Register therefore performed its own market sizing based on various reliable sources.

Scotland has its own native tech scene next to a number of national and international employers in Scotland, along with their IT operations.

"Many 'yes' arguments are to continue, or do more of, things that Scotland already does within the UK; and in the event of a 'no' vote, the Scottish Government looks set to gain further powers over taxation."

Scotland is home to more than 70,000 jobs in ICT, mostly in software products, solutions and services, e-commerce and web development.

The main sectors for the Scottish ICT industry are government, professional services, energy, IT, telecoms and financial services, says ScotlandIS.

Call centres employ 6.1 per cent of Scots, versus 3.91 per cent for the rest of the UK, according to ContactBabel's UK contact centres in 2014: the state of the industry. Call centres are huge in our business, both as a front-line staple for tech firms dealing with their customers and as major consumer of IT resources - networking, comms, software and systems.

Scotland hits above its weight on money in relation to the size of population. Financial services employ 200,000 in Scotland, accounting for 24 per cent of all those working in life assurance in the UK and 13 per cent of all those in banking, according to Scottish Financial Enterprise. Banking and finance suck up IT, with many working in IT in Scotland based in and around Edinburgh. In return, financial services contributes £7bn back into the Scottish economy each year, says Scottish Financial Enterprise.

The Office of the Chief Statistician, Scottish Government calculates Scotland's gross domestic product - the value of all the finished goods and services produced within a country's borders in a specific time period - a £148bn onshore plus a share of offshore activity based on geography (£27,700 per person). The UK's GDP is £1,631bn (£25,400 per person), according to Office of National Statistics.

With this in mind, a few tech firms have put their heads above the parapet, both from the "yes" and the "no" sides, through letters that appeared in Scottish newspapers in support of the two campaigns. Their arguments suggest that ICT professionals are as divided as Scotland itself.

Robert Taylor, who signed a letter in favour of independence, is director of Edinburgh software firm Iformis. "I think many people in IT would say their biggest issue is skills," he says, claiming that "the Scottish Government has always had a more positive policy towards skilled migrants," and has pledged to allow more skilled workers into Scotland under independence.

Scotland's Future, the Scottish Government's white paper on independence released last November, argues immigration policy - currently run on a UK-wide basis - is tilted towards the needs of southeast England. It is planning a points-based approach to encourage skilled immigrants, and the reintroduction of the post-study work visas for international graduates that the UK withdrew in 2012.

He also worries about higher education, a policy that the Scottish Government already controls, but that is funded - in common with the rest of the Scottish public sector - by a block grant from Westminster linked to how much it spends in England.

It is set to produce higher public spending per person in Scotland than elsewhere in the UK, but "yes" supporters worry about it being cut. "I want us to raise our own money and spend it according to our priorities," says Taylor, in this case to keep higher education free in Scotland, unlike in England where students pay fees of up to £9,000 a year.

Chris Jones, a client manager for an international consultancy firm, claims that ICT would benefit from Scottish government plans to undercut UK levels of corporation tax, as well as better support for smaller businesses. He points to Scottish Enterprise in Dundee and Abertay University creating "real computer science courses" to train coders to work in the local games software industry. "That's produced a real, small, virtuous circle," he says, and an independent Scotland would do more of that.

Scotland already boasts three of the world's biggest super computers, with a capacity of 3.1 petaflops per second.

He also sees potential for Scotland to develop specialist ICT business, such as giant ecologically-sound data centres – which need reliable sources of renewable energy and a cool climate, and Scotland has both – and medical informatics, building on the University of Edinburgh's establishment of a Digital Health Institute with the backing of other public bodies.

Many "yes" arguments are to continue, or do more of, things that Scotland already does within the UK; and in the event of a "no" vote, the Scottish Government looks set to gain further powers over taxation, although the details are far from clear. A distinctive Scottish immigration policy could also prove problematic, given that the Scottish Government wants to stay within the border-free British Isles Common Travel Area after independence.