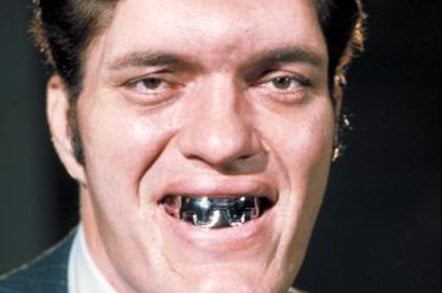 Kiel appeared in the Roger Moore maritime and space capers The Spy Who Loved Me in 1977 and Moonraker, two years later.

His character joined a very short list of competent adversaries to grapple with and give HM’s best agent a sound thrashing before the story was over.

In The Spy Who Loved Me, Bond only broke free of a Jaws death grip by jamming the business end of a broken electric lamp into the assassin's metal mouth to stun him.

But unlike these two, his character earned the rare distinction – reserved for just Bond, his good-guy team and Ernst Stavro Blofeld – of appearing in more than one Bond storyline.

Born on 13 September, 1939, Kiel began acting in the 1950s, appearing in a string of minor roles and on sci-fi classic the Twilight Zone. He took on the role of the The Hulk before being replaced by Lou Ferrigno, after Kiel was deemed not to have the right physique for the part.

But it was as monstrous enforcer and assassin for not one but two villains with designs on global domination that propelled him to fame.

And it wasn’t just his stature at 7ft and 2 inches and threat of death by gnashing that helped Kiel’s Jaws stand out. It was the light sense of camp, too.

Jaws survived a number of experiences that would have broken lesser men, including being hit by a van, thrown from a moving train and careening off a cliffs, each time getting up and walking away. Bond’s producers have a reputation for riding memes, and The Spy Who Loved Me and Jaws appeared after Steven Spielberg-produced Jaws appeared in theatres in 1975.

In The Spy Who Loved Me, Jaws battles a shark.

In Moonraker, he survives falling several thousand feet after accidentally disabling his own parachute, being saved by a circus tent roof and trapeze net.

He finds love in Moonraker with the tiny, Heidi-haired Dolly who opens up his soft side. The pair are last seen hurtling to Earth in a section of Hugo Drax’s doomed space station, popping a bottle of champagne saying: “Well, here’s to us,” his only spoken words in Bond. As the credits rolled, we were told the US Navy picked up the pair.

Jaws was inspired by Bond creator Ian Fleming’s description of a crook named Horror with steel-capped teeth who appeared in the novel, The Spy Who Loved Me.

Kiel reckons he managed to convince the makers of the film to give Jaws some human touches to counteract the fact he used his teeth to kill people.

As Kiel pointed out in this interview, here, Jaws became too likeable to kill off and he was resurrected for a second outing in Moonraker.

At more than seven feet, though, Kiel wasn't a shoo-in for Jaws, and Bond uber producer Albert R "Cubby" Broccoli has also considered green-cross-code-man and Darth-Vader body David Prowse for the part. Kiel pitched that who ever played Jaws should show him as more than a remorseless killer and as a man afflicted with human sensibilities. Broccoli seems to have gone for this.

Among his other films, Kiel appeared in The Longest Yard, Cannonball Run II, Force 10 from Navarone, Inspector Gadget and was the voice of Vlad in Tangled. ®