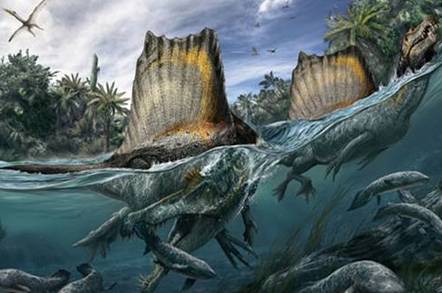 Pic Paleontologists have published the first pictures of a gigantic half-crocodile, half-duck dinosaur that evolved to swim – and was bigger than the fearsome Tyrannosaurus Rex. 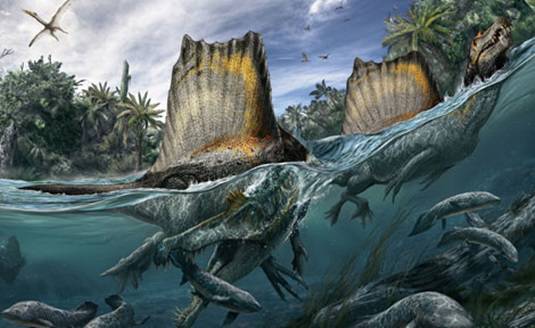 Just when you thought it was safe to go back in the water ...

"Working on this animal was like studying an alien from outer space; it's unlike any other dinosaur I have ever seen," said Nizar Ibrahim at the University of Chicago.

The Spinosaurus aegyptiacus skeleton is 50 feet long, and has a long, crocodilian skull, four legs and a series of spines measuring up to seven feet tall on its back. It lived about 95 million years ago in the Cretaceous era, and was found in what was then an area dominated by river systems.

The dinosaur was first unearthed in Egypt more than a hundred years ago by German fossil hunter Ernst Freiherr Stromer von Reichenbach, who ascertained that his specimens showed a land-living dinosaur that had adapted to hunt in the water. Sadly, however, the bones were destroyed in a 1944 bombing raid on Munich, although his photographs and notes survived.

The University of Chicago team tracked down the records and set about trying to rediscover the dinosaur. They found some Spinosaurus bones in an Italian museum, which had purchased the remains from a fossil dealer in Morocco; the scientists were then able to track down the seller.

He took them to a cliff face in the Sahara desert named the Kem Kem beds. After multiple digs they found most of the bones of a new specimen, including a partial skull, and took the remains back to Chicago, where they were cleaned and laser scanned so that the university's CAD system could recreate the skeleton.

"We relied upon cutting-edge technology to examine, analyze and piece together a variety of fossils," said Simone Maganuco from the Natural History Museum in Milan. "For a project of this complexity, traditional methods wouldn't have been nearly as accurate."

The fossil skeleton had a number of signs that Spinosaurus was aquatic. For a start its nostrils were located on the back of the skull, enabling it to go face down in the water, and it had neurovascular openings in the tip of its snout, similar to those used by modern-day crocodiles to sense pressure changes, and thus prey, in the water.

All of the Spinosaurus bones lacked a chamber for marrow, which is common in creatures used to being in the water. Marrow increases the buoyancy of an animal and not having any makes it easier to dive for prey.

Crucially, the dinosaur's rear legs also showed an aquatic bent. The thigh was much shorter than the shin bone, an adaptation seen in animals that paddle through water, while its feet were very long and may have been webbed.

As for the spines on its back that give the dinosaur its name, the team thinks they were more for show than anything else. The lack of blood vessels indicates that it wasn't used to regulate body temperature or store fat.

The team has published its findings in Science and the remains will now go on display in the National Geographic Museum in Washington DC for a short period before being returned to Morocco to form a permanent exhibit. ®