Moonshot on the launchpad 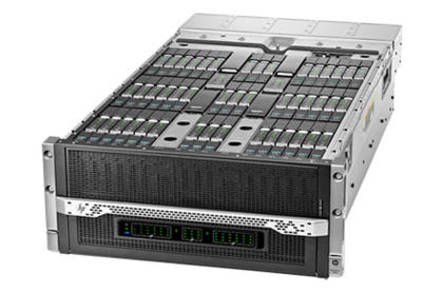 One of the things that surprised many in our recent Regcast on converged infrastructure (CI) was the claim by HP’s Clive Freeman that hardware optimisation for well-defined workloads far outstrips the performance you would get for the same price using software optimisation on a standard platform.

Afterwards, I asked Clive how HP had made the calculation. He showed me some hardware tests that deliver, in his phrase, “much more bang for your buck, for the right workload”.

There are 45 Moonshot cartridges in a 4.3U chassis and each cartridge has either one or four servers, depending on the model. Each server consumes 10W.

HP refers to Moonshot as “software-defined servers”: the software load defines the specialised cartridge you choose. HP plans specialised systems for applications such as big data or desktop virtualisation across its entire range of converged systems.

So what does HP’s testing show? Benchmarking used a targeted workload, so your mileage will certainly vary. But compared with a general-purpose server, two or three Moonshot cartridges (consuming 30W) delivered blade-like performance on the workloads, with a much smaller footprint and purchase price.

The internal research shows that Moonshot’s low-power servers, based on Intel Atom or AMD Opteron CPUs, require 89 per cent less energy, 80 per cent less space and 77 per cent less cost than generic servers.

But this is not a general rule: HP anticipates that the market is for 19 per cent of the volume servers that will be sold between now and 2016.

What workloads can benefit? Converged systems are useful if you can define a predictable, specific workload or type of workloads. Optimising the hardware for these workloads, say the advocates of converged systems, offers both performance and management advantages.

The workloads for Moonshot are likely to be lightweight and highly parallel. They don’t make use of the CPU cycles in traditional servers but need to be able to fetch and deliver data.

That means virtual desktops, web apps, mobile apps or transactional processing could benefit. Of course, there is not one converged architecture: what you buy is configured for what you need. It is not so useful for compute-intensive apps or virtualisation.

There is also one throat to choke when you need support. And perhaps the biggest benefit of all is a single management and monitoring platform.

Forrester also found that CI, offering integrated components on delivery, is sometimes a catalyst for change in how IT is delivered and how its budget is spent.

One in three of the respondents to its survey said the use of CI allowed the merging of previously separate teams in IT; two-fifths claimed they could shift resources from maintenance to new initiatives; and three-quarters said their responsiveness to new business requirements improved.

But while CI might make change possible and beneficial, it is quite another thing to assume this will inevitably happen. Forrester’s report points out that CI has, at an early stage, been most aggressively taken up in building private clouds, where management and monitoring benefits create flexibility and responsiveness.

More specific workloads that could benefit from the efficiency benefits of specialised CI hardware configuration – for example, big data – are taking longer to be accepted, according to Forrester, because existing software (think Hadoop) was designed to be implemented on generic lowest-cost servers.

Yet ultimately, CI may become compelling for the simple reason that it lowers the management burden, even for a small data centre with none of these specialised workloads.

It might take longer to converge the IT department’s teams – but in the meantime they can manage and optimise through a single pane of glass from day one. ®