More than 20 products in the works, with first to touch down by Xmas 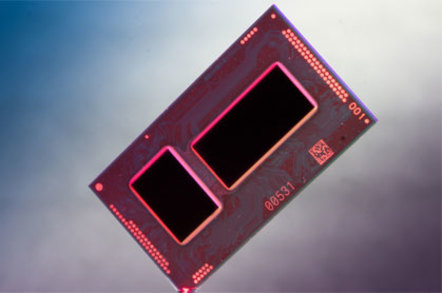 "Core M is the first of a new product family designed to deliver the promise of one of the world's thinnest laptops and highest performance tablets in a single 2 in 1 device," Intel's senior VP and general manager of personal computing Kirk Skaugen said in a canned statement on Friday.

Not that the announcement came as any real surprise. Chipzilla has been promising us the Core M since the Computex show in Taipei in June, and it spilled the details on what we can expect from the chip in a presentation last month.

In a nutshell, Intel's new 14-nanometer "Broadwell" process delivers chips that run faster and cooler than the current generation of Core processors, which in turn means they can do away with fans so that OEMs can deliver devices with slimmer form factors.

At IFA, Intel said that more than 20 Core M–powered devices are already in the pipeline, most of which will be designed to operate in both tablet and laptop modes.

Many of the major brand-name PC vendors had prerelease kit on display at the show – including Acer, Asus, Dell, HP, Lenovo, and Toshiba – with the first devices expected to hit store shelves as soon as October.

Intel also let slip that it has been working with original design manufacturers (ODMs) to produce own-branded Core M kit. Specifically, Taiwanese outfit Wistron will build a product based on Chipzilla's "Llama Mountain" reference device, which it showed off at Computex.

In launching the Core M, Intel gave a few more details of how it plans to fill out the product line. The lower-end model of the processor, dubbed the Core M-5Y10/5Y10a (the "a" model being the OEM version) will max out at 2.0GHz, while the Core M-5Y70 will bring the clock speed up to 2.6GHz.

One thing the first run of Core M chips won't be shipping with, however, is support for Transactional Synchronization Extensions (TSX), hyped new instructions that can improve the performance of multithreaded code. Broadwell chips are meant to come with TSX support, but a bug in Intel's silicon means the company will be shipping the first batch of Core M chips with the feature disabled.

Intel also revealed that the Core M is a conflict-free part – meaning it has certified that none of the metals used to build the chip have been mined using slave labor in war-torn regions. The company has previously vowed to ensure that its entire supply chain is conflict-free by 2016.

Chipzilla says the first batch of Core M devices will be available at retail in time for the holiday shopping season, but that broader availability of the new chips won't happen until the first half of 2015. ®