Did you know there's a hundred quadrillion suns in our Laniakea neighbourhood? 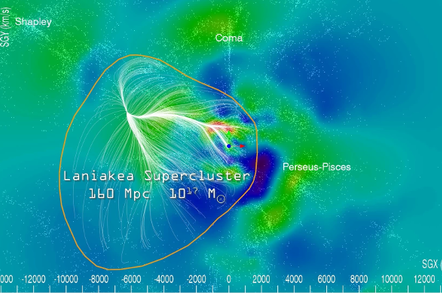 Astronomers have finally figured out just where the heck in the Universe we are – and it turns out to be the suburbs of a galactic supercluster now known as Laniakea.

Galaxies don’t tend to be scattered throughout the Universe willy-nilly; they tend to bunch up into clusters, groups and superclusters. Our Local Group contains dozens of galaxies that are in massive clusters of hundreds of galaxies, all connected by a web of filaments that are made up of, you guessed it, yet more galaxies.

When these filaments intersect, you get even more immense structures called superclusters, which are also interconnected, but have less well-defined boundaries – making them harder to map.

An international team of astronomers, led by University of Hawaii scientist R Brent Tully, have become the first to map the huge supercluster of galaxies that contains the Milky Way and have named the region Laniakea, the Hawaiian for “immense heaven”. 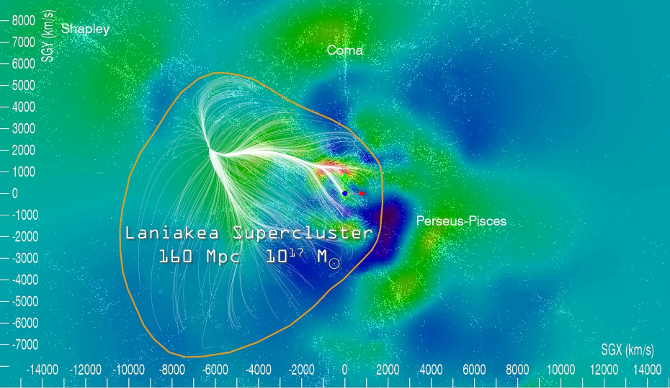 To get the lines drawn on the map, the researchers studied the impact of superclusters on the motion of galaxies. Like everything else in the Universe, galaxies are moving around under the force of gravity, but a galaxy in between two superclusters will be pulled in both directions. The exact way in which these gravitational forces end up balancing out will determine how the galaxy-in-the-middle moves.

By figuring out the velocity of galaxies in our local neighbourhood, the boffins were able to define the region of space where each supercluster dominates.

It turns out that the Milky Way is in the ‘burbs of the Laniakea supercluster, which is 500 million light years in diameter and contains the mass of a hundred quadrillion suns in 100,000 galaxies. Our own galaxy sits on the border that Laniakea shares with another supercluster, Perseus-Pisces.

The full study, simply titled 'The Laniakea supercluster of galaxies', was published in Nature. ®

Video of the astronomers' findings as published in their paper.