If we agreed it was serious and we knew who did it, anyway 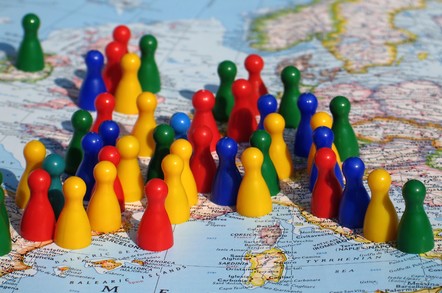 NATO is set to agree a new cyber defence policy that would mean any severe cyber attack on a NATO member could be considered tantamount to a traditional military attack and invoke the alliance's collective defence provisions.

Article V is the collective defence clause of the NATO treaty by which an attack on one member is considered an attack on all. Extending this rule to cyberspace is on the agenda for a NATO summit in and around Cardiff, Wales later this week, the New York times reports.

Cyberspace is considered by military strategists as the fifth domain of war – land, sea, air and space are the first four. Extending the rule to cyberspace would send a message to Russia, which is blamed for attacks against Estonia in 2007 which floored the Baltic state's banking and telecom systems during a time of civil unrest, as well as cyber-attacks that accompanied a ground war in Georgia a year later.

The recent upheavals in Ukraine were also accompanied by cyberattacks, some of which are also blamed on Russia.

Infosec experts reckon the collective defence clause is unlikely to be invoked in anything but the most extreme instances, in which case a broader armed conflict is likely to have erupted.

"You hacked us so we'll bomb you" isn't a terribly rational response, even in cases where blame for a cyber-attack can be pinned on an aggressor.

Cyber attacks are best handled through diplomatic channels, according to one seasoned IT security pro.

"Article V has only ever been invoked once in the history of NATO - in the aftermath of 9/11," explained Stephen Bonner, partner in KPMG’s cyber security team. "The reality is that few cyber attacks are likely to be of sufficient scale and impact to justify invoking Article V - and they would not happen in isolation from a broader deterioration in international security. In other words, if there was a state attack then it would have a broader context. This announcement is primarily a rhetorical point which is possibly aimed at having a deterrent effect."

"Of course, Article V determinations are a political judgement made at the time of an incident, not in advance. There are risks around the increased militarisation of cyber space and we should be cautious about fuelling this.

“After all, in most cases, the response to a cyber attack is a civil matter," he added.

The Tallinn Manual on the International Law Applicable to Cyber Warfare, which was put together by an independent group of legal scholars and lawyers last year, offers a Geneva Convention-style set of rules for cyber warfare. No international cyber-security incidents to date have clearly crossed over into something comparable to an armed attack, according to the legal experts.

The threshold, if it came to that, would be an immediate response to something like Stuxnet rather than something like the cyber conflict in Estonia.

Stuxnet, nowadays widely accepted to have been a joint US-Israeli cyber operation, sabotaged nuclear processing centrifuges in Iran after infecting industrial control kit that controlled these devices with the eponymous malware. It is generally thought to have set back the Iranian nuclear weapons programme by a matter of some years. ®

And Queen Lizzie will too