But be fair: Clouds are Clouds 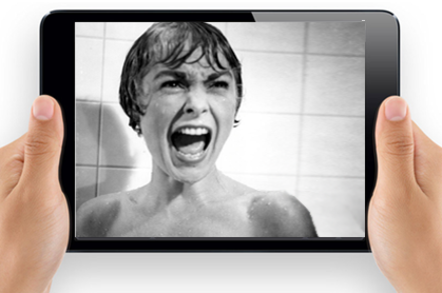 Apple’s two-factor authentication doesn't actually protect iCloud backups or photo streams, contrary to what many iPhone and iPad fondlers might wish to believe.

Scores of (mostly female) celebrities, including Oscar winner Jennifer Lawrence, had their iCloud hacked before miscreants siphoned off private nude snaps which surfaced on 4Chan over the weekend. It seems in at least some cases that supposedly long-deleted photos from celebrities’ phones may have been recovered by hackers from iCloud accounts and perhaps elsewhere (more on that later). The FBI has been called in to investigate.

Systems security weaknesses, along with weak passwords is believed to be to blame for enabling hackers to gain full access to the iCloud accounts. In response, Apple advised punters to use its two factor authentication technology, as previously reported.

After more than 40 hours of investigation, we have discovered that certain celebrity accounts were compromised by a very targeted attack on user names, passwords and security questions, a practice that has become all too common on the Internet. None of the cases we have investigated has resulted from any breach in any of Apple’s systems including iCloud® or Find my iPhone. We are continuing to work with law enforcement to help identify the criminals involved.

To protect against this type of attack, we advise all users to always use a strong password and enable two-step verification. Both of these are addressed on our website at http://support.apple.com/kb/ht4232.

This, as it turns out, is spin that only helps in taking the heat off Apple rather preventing a repetition of something similar happening again.

iCloud backups can be installed on new devices with only an Apple ID and password. The use of two factor-authentication technology does have a role in iCloud but only when it comes to signing in to "My Apple ID" to manage an account; or when making iTunes, App Store, or iBookstore purchases from a new device or (lastly) getting Apple ID-related support from Apple..

It is NOT necessary to enter a verification code to restore a new device from an iCloud backup, a built-in design feature that hackers seem to have latched onto.

Hackers may have obtained celebrity passwords through guessing security questions, phishing or malware-based attacks. The exact route is unclear but a good run down of possible methods and their relative likelihood can be found in a blog post by Rik Ferguson of Trend Micro here.

Security appliance vendor Checkpoint added: "After a hacker has obtained the appropriate iCloud username and password for a person, they can use tools like dr.fone to recover data from the three revisions of iCloud backups – which can include content that the user thought was deleted."

It may even be possible to access iCloud backups using only an iTunes authentication token completely getting around the need to obtain an Apple ID and password. Law enforcement officials would be able to get ahold of this token from a suspect's PC while hackers might be able to obtain it through more nefarious means, either malware or phishing.

Apple's particular shortcomings have been fairly well known in the field of computer forensics, if not the wider IT market, for some time. ElcomSoft security researcher Vladimir Katalov presented research on what portions of iCloud are protected by two-factor authentication at the Hack In The Box security conference last year. His presentation, Modern Computer Forensics,which also covers issues related to Android, BlackBerry backups and Windows Phone 8, can be found here (PDF).

Page 27 of the presentation explains that Apple 2FA does not protect iCloud backups, Find My Phone data or other documents stored in the cloud.

ElcomSoft updated its forensic tool to take advantage of what (with the benefit of retrospect) looks like a glaring security shortcoming in Apple's technology back in June 2014, as the firm explained at the time.

Until now Apple iCloud data acquisition was only possible with Elcomsoft Phone Password Breaker provided Apple ID and password are at hand. But now we have discovered a way to gain access to iCloud information without usually necessary login credentials.

The new EPPB version suggests law enforcement and investigators an easy password-free access to iCloud accounts extracting essential information in real time without delay no matter if password is available or not.

Using special authentication tokens obtained from suspects' computers (both Mac and Windows PC) with help of our little command-line tool (no installation required) you can quickly get access to iCloud backups regardless of password strength or its availability at all.

Next page: Fact is, full 2FA would be a nightmare if you ever lost your phone
Page:
Tips and corrections
61 Comments