No reports of data loss as MS 'fesses up to mess, but US long weekend delays fix 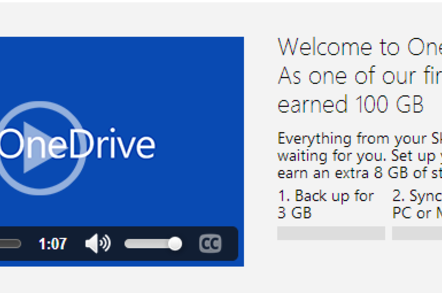 OneDrive users are complaining that Microsoft's sync 'n' share service corrupts Office 2013 files when they attempt to open them.

Answers.microsoft.com threads like this one explain that it is impossible to open some files stored in OneDrive – Excel files seem especially susceptible – from machines other than the one that created it. The file loads, but content is replaced by gibberish and hexadecimal codes.

Reports of the problem started to emerge on Wednesday, August 27th. Only documents created since that date suffer from the problem.

Myce.com since tested the scenarios reported by users and found that Windows 8.1 users seem to be the only ones adversely impacted by whatever is going on in Microsoft's cloud. Windows 7 users appear to be spared the pain.

There's no data loss apparent in this mess: documents remain accessible in a variety of ways. One workaround is to sync a OneDrive account with a Windows 7 PC. The resulting downloads to the Windows 7 machine restore access to files.

As is pointed out in the thread we've linked to above, Microsoft is yet to formally address the matter.

But the tweet below from OneDrive program manager Arcadiy Kantor offers some relief.

@paulinmadrid Hey there--sorry about your problems and the delay. We'll look into this.

The delay Kantor refers to is likely caused by the Labor Day holiday celebrated in the USA on Monday, September 1st. Not even Microsoft's hard-working culture is exempted from public holidays and it is likely that Redmond's halls are all-but-empty over the long weekend.

Posters to the thread we've linked to above say Microsoft has acknowledged the problem, but hasn't advised when a fix will arrive. ®