But you'd better play nicely with broadcasters until then 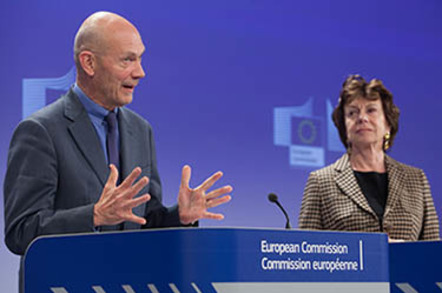 Europe’s digital chief presented a report on Monday that sets out a plan to redistribute access to the Ultra High Frequency (UHF) spectrum band.

Digital Agenda Commissioner Neelie Kroes said that there were obviously differences of opinion on who should have most access, but she said Europe cannot ignore the needs of the growing digital industry.

Pascal Lamy, former EU Commissioner and former head of the WTO who carried out the report, said it had been a “peacemaking mission” between two warring communities. He admitted that he had not been able to reach a 100 per cent consensus, but stressed that his 2020, 2030, 2025 plan (possibly the most torturous of names to come out of the Commission recently) was the best hope for getting internet service providers, telcos and broadcasters to work together.

Kroes also added that with 28 member states all sticking their noses in, “nothing is easy”, but said Lamy’s timeline means that no one can claim they didn’t know it was coming.

This means that at the World Radiocommunication Conference in 2015, the EU would reject any plans to allocate this lower band (470 - 694 MHz) to mobile. This has alarmed some in the telecoms sector.

“We are concerned that the report’s recommendations on the sub-700MHz band could put Europe at a competitive disadvantage compared to other regions,” said Anne Bouverot, Director General, GSMA. "Limiting Europe’s flexibility on the possible co-existence of mobile and digital broadcast services until 2030 will discourage investment in world-leading mobile networks.”

However, Lamy also proposed a so-called “flexibility option”, which would potentially allow some mobile downlink connectivity in traditional broadcast spectrum. Bouverot welcomed this element and said it should be looked at more closely.

Although Kroes commissioned the report, she, like most of her fellow Commissioners, will step down at the end of October. She said she hoped Lamy’s report would be essential “bedtime reading” for her successor.

Several member states – including Finland, Germany and Sweden – have already said that they plan to use the 700MHz for wireless broadband and a new Digital Agenda Commissioner from one of those countries may want to push the plan further.

Alternatively, a commissioner from a country more attached to terrestrial TV might decide to stall, something Lamy said would be catastrophic: “We simply have to modernise, we are running out of time and will fall behind other regions if we do not.” ®