EMC slings Isilon onto a forklift, shifts it into Emerging Technologies 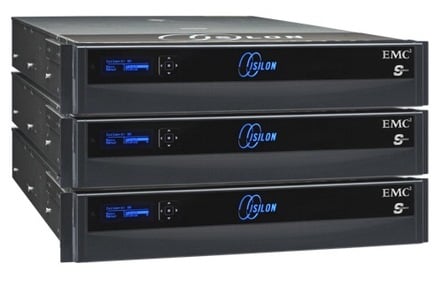 EMC is moving its Isilon scale-out storage systems into its Emerging Technologies division, alongside its DSSD, XtremIO and ViPR gear.

ViPR was in the Advanced Software wing until that division's president Amitabh Srivastava was promoted to technical advisor to EMC II CEO David Goulden. Jeremy Burton, EMC president for products and marketing, said the timing of Srivastava's move was right as the exec wanted a new challenge.

Now Burton is moving Isilon into Emerging Technologies as well, giving it two flavors of product: performance – DSSD and XtremIO – and capacity – Isilon and ViPR.

One reason for this is that amid a growing focus on cloud and mobility, IT systems are not going to be sold to the CIO and traditional hardware buyers; they’ll be sold to the application owners in lines of business.

Burton said Isilon hit the nail on the head in that respect: it sought out video editors in showbiz, and people processing seismic data in the oil and gas industries. These application owners needed fast scale-out storage, and Isilon had the tech they wanted, we're told.

He said DSSD would provide a performance tier in next-generation storage systems, and it needs to be integrated with a capacity tier. ViPR with its HDFS and object data services is part of that, and so too is Isilon. So Burton has three key building blocks in one division, with one sales organization, meaning they will get the focus they need.

He said there are fewer than ten products inside EMC that really move the needle: Brian Gallager’s Enterprise Storage division with its VMAX and VNX arrays; Guy Churchward’s Data Protection Division with its main products; and now, if we understand correctly, this third platform technology trio in Emerging Technologies.

Our supposition is that an EVO:RACK product from EMC would probably also come from CJ’s Emerging Technologies unit. ®