Spanish launch goes titsup, we're off to the US of A 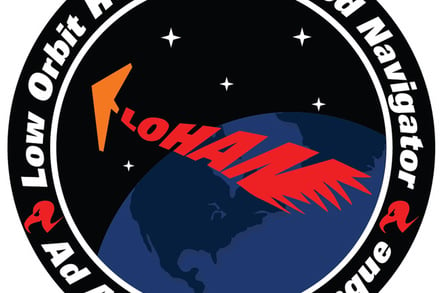 The traditional portentous drumroll and fanfare of trumpets has added timpani and a throbbing bass synth crescendo today as we announce that the planned launch of our our Low Orbit Helium Assisted Navigator (LOHAN) mission has been relocated to New Mexico's Spaceport America.

This shock news comes at the end of an epic struggle against the Spanish forces of darkness whose only purpose appears to be to prevent anyone doing anything, anywhere ever.

No, it's not what you think. Rather, we've fallen victim to a comedy combination of EU blundering and perverse local law.

The power plant for our Vulture 2 spaceplane is a Cesaroni P54-3G J140-P White Longburn. In the US you can pretty well get them in Walmart, but on this side of The Pond they have to be especially imported.

Way back yonder when we started the spaceplane design process, and indeed it was all fields round here, we did the legwork for getting a couple of these motors through Rebel Space in Holland.

The extremely helpful chaps told us all Cesaroni reloads were awaiting CE certification to permit import, but that was imminent, so there shouldn't be a problem. All we'd need to get the kit to Spain were a specialist courier and copies of the "Intercommunity transfer of explosives" documents, as demanded by "Council Directive 93/15/EEC of 5 April 1993 on the harmonization of the provisions relating to the placing on the market and supervision of explosives for civil uses", duly signed and stamped by all the countries through which the reloads would pass.

We thank the relevant Dutch, French and Germans authorities, who all responded to our request with alacrity, but sadly the Spanish are off our Xmas card list.

Despite the support of the Guardia Civil explosives division in Madrid, a very rude man from the Ministry of Obstruction declined to authorise the Intercommunity transfer of explosives, citing local law.

Specifically, and quite sensationally, he informed us that in order to import the reloads, we'd need to own an explosives factory.

When we suggested it was perhaps excessive to require possession of an entire gunpowder facility merely to buy some hobbyist rocket motors, he simply replied by sending links to the relevant "how to apply to open an explosives factory" documents and sneerily noting: "This process can take some time."

On top of this, for some reason known only to the Oracle of Brussels – a wizened hag who divines meaning by stirring shredded European Union directives into a cauldron of boiling citizens' tears of frustration – the powers that be then certified Cesaroni reloads except the longburn models.

And that, dear reader, was the end of that.

Suitably fired with indignation, we got straight in touch with Spaceport America, who told us that in principle the mission is go for New Mexico. We do, though, have to get an FAA waiver, even for a facility specifically dedicated to such shenanigans. We're dealing with that right now.

While the relocation obviously presents some big logistical challenges, it does offer us the chance to work in person with Colorado-based Edge Research Lab, who back in May kindly sent us a HackHD hi-def camera.

They've volunteered to help out in any way they can, and since they're High Altitude Ballooning (HAB) experts, that's very handy indeed.

Logistics aside, there's a pretty hefty cost associated with the Stateside operation. El Reg's pockets are deep, but there is a limit, and that's why we're poised to rattle the tin down at Kickstarter to fund the basic costs. We know that a lot of the LOHAN fans among you have been demanding merchandise, and that's exactly what you'll get in return for your support.

And before the diehard Europeans among you kick off, all the kit will be available sporting this splendid alternative:

The Kickstarter rewards will come with a "not available in the shops" guarantee, so if you want a piece of the hot merchandise action, showing your support will be the only way to get it. Cunning, eh?

Naturally, we'll let you know when the campaign goes live, and let's see if between us, we can finally get this bloody spaceplane off the ground. ®