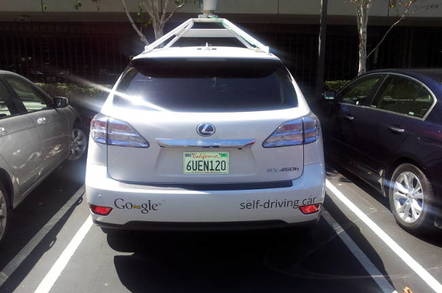 The US government wants to save lives on the road by demanding a safety-focused wireless communication standard for moving vehicles.

Said data effectively could be messages along the lines of you're too close, move away or I'm braking, why aren't you braking? Thus, when relayed to drivers, the alerts could potentially prevent roughly 600,000 smashes and 1,000 deaths on the road per year, we're told.

"Some crash-warning V2V applications, like Intersection Movement Assist (IMA) and Left Turn Assist (LTA), rely on V2V-based messages to obtain information to detect and then warn drivers of possible safety risks in situations where other technologies have less capability," the NHTSA said in a report [PDF] published on Monday.

"Both of those applications address intersection crashes, which are among the most deadly crashes that US drivers currently face."

According to the NHTSA's estimates, a system for secure V2V communications could cost as much as $100m to develop, and the implementation would require carmakers to equip the device with at least two dedicated short-range communications devices.

The NHTSA notes, however, that without the government taking the lead, systems for car-to-car communications may not reach the point of standardization.

"It is NHTSA's view that, if V2V were not mandated by the government, it would fail to develop or would develop slowly," the administration wrote.

"Because the value of V2V to one driver depends upon other drivers' adoption of the technology, V2V falls into the class of goods that economists call network goods."

While the administration's study has largely focused on the use of V2V for dashboard alerts, the NHTSA said fully autonomous self-driving cars could use the communications equipment to make their own decisions – although it's mindful that V2V standardization could slow the development of market-ready self-driving cars.

At this point, however, the NHTSA said that it is a long way from mandating hardware and software standards for V2V communications systems. The administration is delivering advance notice of proposed rule-making, the first step in a lengthy bureaucratic process which will include a call for comments from the public.

Drivers can submit their thoughts through the regulations.gov website. ®

And don't even think of letting them near humans just yet, the uncultured vagabonds

President: Where we're going, there are no steering wheels

Family of technician slain by factory robot sues everyone involved

While Facebook reinvents Sadville, we still dream of flying cars