From Clippy to Clippers: Hi, I see you're running an NBA team now ... 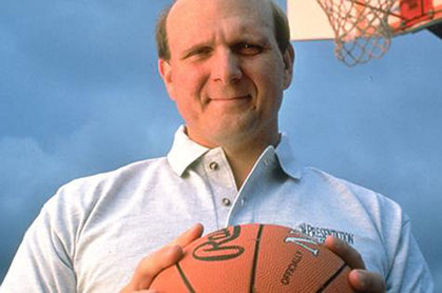 Former Microsoft CEO Steve Ballmer is today stepping down from the Windows giant's board of directors – just six months after he was succeeded by incoming chief exec Satya Nadella.

Ballmer announced his retirement in August last year, but remained at the helm until Nadella took over in February. Shy-and-retiring Ballmer also held a seat on the board, and continues to be the largest shareholder in Microsoft.

In May, while Nadella was settling in, Ballmer blew $2bn of his estimated $18bn fortune on buying the Los Angeles Clippers basketball team. And it's for this reason, and others, that he's stepping down.

"In the six months since leaving, I have become very busy," Clippy-to-Clippers owner Ballmer wrote today.

"I see a combination of the Clippers, civic contribution, teaching and study taking a lot of time ... Given my confidence and the multitude of new commitments I am taking on now, I think it would be impractical for me to continue to serve on the board, and it is best for me to move off.

"The fall will be hectic between teaching a new class and the start of the NBA season so my departure from the board is effective immediately."

Ballmer joined Microsoft in 1980 and worked his way up to president and CEO by 2000, allowing cofounder and former chief exec Bill Gates to spend his days as chairman and chief software architect.

Youtube video: I have four words for you. I. Love. This. Company. Yeeahh.

"I bleed Microsoft — have for 34 years and I always will," Ballmer continued in his missive today. "I continue to love discussing the company’s future. I love trying new products and sending feedback. I love reading about what is going on at the company. Count on me to keep ideas and inputs flowing."

In fact, the chair-flinging, potty-mouthed biz supremo of old made sure there were plenty of, er, encouragements for the new CEO in the farewell statement. For example, Ballmer told Nadella, "You’re off to a bold and exciting start." Translation: Don't screw this up.

"I hold more Microsoft shares than anyone other than index funds and love the mix of profits, investments and dividends returned in our stock. I expect to continue holding that position for the foreseeable future," he added. Translation: Seriously – don't screw this up.

Ballmer signs off with: "I will benefit through my share ownership. I promise to support and encourage boldness by management in my role as a shareholder in any way I can." Translation: Your ass is mine.

"As you embark on your new journey, I am sure that you will bring the same boldness, passion and impact to your new endeavors that you brought to Microsoft," Nadella said today in response. Judging by the video below of Ballmer meeting Clippers fans this week – let alone the punchy letter above – boldness, passion and impact are not in short supply. ®