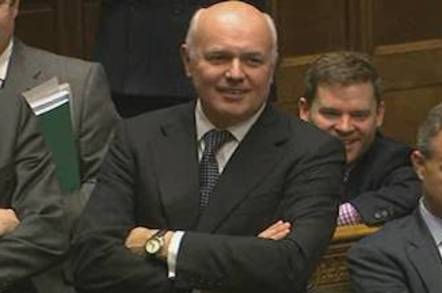 A government body tasked with flagging up troublesome Whitehall projects has been accused of secrecy and ineptitude over its handling of the Department for Work and Pensions' widely panned Universal Credit programme.

MPs sitting on the Public Account Committee said in a report published today that the Major Projects Authority, established by the Tory-led Coalition in 2011, was failing to adequately admonish ministers and top civil servants over spending decisions made for crashingly expensive IT schemes.

Unsurprisingly, the one-dole-to-rule-them-all programme steered by Secretary of State Iain Duncan Smith was singled out by the panel's chair Labour politico Margaret Hodge.

"We are particularly concerned that the decision to award a 'reset' rating to the Universal Credit project may have been an attempt to keep information secret and prevent scrutiny," the MP warned.

In May, the MPA – which was created to improve project deployments across Whitehall in partnership with the Cabinet Office, the Treasury and with the blessing of the Prime Minister – cobbled together a new "reset" category for Universal Credit. It explained at the time:

The "reset" category has been applied to the Universal Credit project. We have undertaken significant work to develop a "reset plan" to place the roll-out of Universal Credit on a more secure footing, and the "reset" DCA [delivery confidence assessment] reflects this new status of the project.

Worse still, the project will not be flagged with a relevant green, amber or red alert from the MPA until May next year, arguably leaving the Universal Credit programme free of proper scrutiny just at the time when MPs are calling for more details about an IT scheme that has appeared doomed since its inception.

The system has been dogged with technical problems leading to millions of pounds being written off by the government.

The government’s transparency policy is too restrictive as it prevents useful data sets, such as the amount spent so far, from being published and stipulates that major project data can only be published once a year. This is too infrequent and means that the data available on high-profile, high-cost projects can be significantly out-of-date.

Hodge and her colleagues urged the MPA to publish its findings "more frequently" and provide greater detail on individual programmes such as Universal Credit "even if this means reviewing the government's transparency policy," the committee said. ®