Just a couple of little catches, though 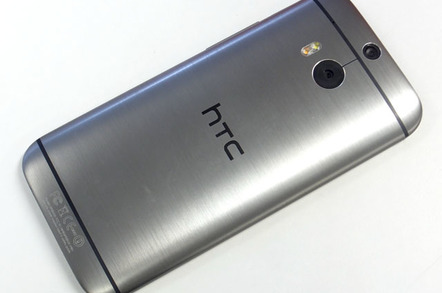 HTC has launched an M8 phone running Microsoft's latest Windows Phone OS – but only in the US and only for the Verizon network.

"Consumers love the HTC One (M8) and today's introduction extends that enthusiasm to new audiences hungry for choice in their mobile experience," said Jason Mackenzie, President of HTC Americas in a canned statement.

The new Windows Phone M8 has almost exactly the same hardware [PDF] as the Android version unveiled in March: a 2.3GHz Snapdragon 801 chip from Qualcomm, 2GB of RAM, and 32GB of storage – minus the 8GB required for the Redmond operating system.

Engineers from HTC and Microsoft have collaborated to get the latest build of the OS on the handset, so users will get Windows 8.1 with the Cortana personal assistant, which is a first for HTC. The handset has a promotional price of $99.99, and people who buy through the Microsoft store get a $25 case and screen protector thrown in for free.

"The HTC One (M8) for Windows is true to the flagship product's award-winning design and unique experience while also taking the best of what Windows Phone has to offer," said Darren Laybourn, VP of engineering for Microsoft. "We succeeded in offering customers the best of both our worlds with this phone."

Well, kind of. The device is only available in North America, exclusively from Verizon – although you can use it internationally as it supports various LTE, HSPA+, GSM/EDGE and CDMA radio bands.

Overall, this could be a sign that there has been something of a rapprochement between HTC and Microsoft. The firms used to be joined at the hip after Microsoft dumped (some would say screwed over) the British smartphone maker Sendo, which built the first working Windows smartphone in 2002.

After that, HTC was the premier Windows phone vendor, but in the last few years the Taiwanese firm has been concentrating more on Android devices – in part because they are more popular but also due to Microsoft's close partnership with, and eventual ownership of, Nokia's handset cranking biz.

So is this a sign that HTC and Microsoft are back in bed together? Probably not if this phone is anything to go by. The new M8 is on a very limited release even though HTC probably got a big subsidy from Microsoft to produce it.

But it is a sign that Redmond is doing whatever it can to raise Windows Phone above minnow status in the smartphone OS pool. It'll take more than the HTC deal to achieve this – developers are just as important – but Microsoft hasn't given up on its phone OS just yet. ®