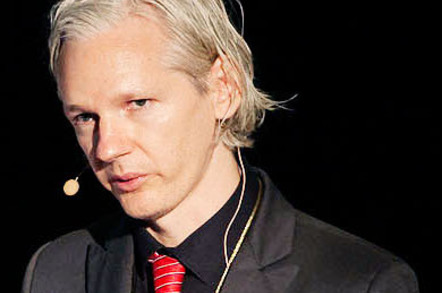 Head WikiLeaker Julian Assange™ has said he is planning to leave the Ecuadorian embassy "soon", but neglected to say exactly when.

In a press conference arguably designed to satisfy Assange's need for global attention more than the world media's thirst for clues about his future plans, the WikiLeaks founder dodged questions on his health.

He has now spent two years holed up in the embassy in Central London in an attempt to dodge extradition to Sweden where he faces questioning over two sexual assault allegations. He has not yet been charged and has maintained his innocence.

Ahead of the junket, Sky News claimed Assange's two-year stint in the embassy had left him suffering from a range of health problems, including "a heart condition, a chronic lung complaint, bad eyesight and high blood pressure".

However, the blond campaigner – sporting a hairdo which bore a striking resemblance to Richard Branson's barnet – refused to elaborate further, only hinting that confinement without sunlight would leave anyone with "certain difficulties they would have to manage".

"I am leaving the embassy soon, but perhaps not for reasons the press and Sky News are saying," he said. "I think that is enough of an answer."

Although Assange promised to be brief, he was anything but, ranting at length about the Swedish, British and American governments. He reiterated claims that the Swedish government had failed to guarantee him immunity from extradition to the United States, where he said investigators had amassed 42,000 pages worth of evidence on him. ®