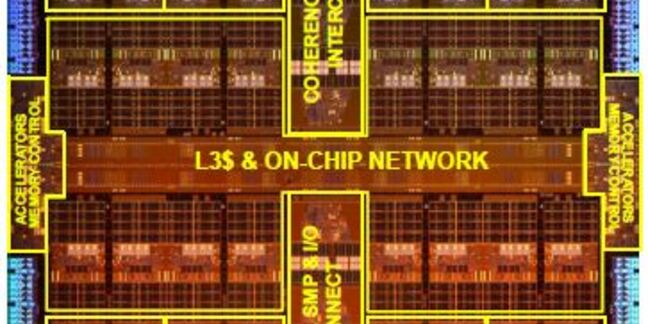 Oracle has revealed details of its next-generation SPARC CPU, the M7.

As John Fowler, Oracle's executive veep of systems predicted when chatting to The Reg last month, the company took the wraps off the M7 at last week's Hot Chips CPU-fest and filled it with goodies to make Oracle software go faster.

Under the hood of the CPU, as depicted in the shot of its die below, are eight “core clusters”. Each cluster contains four cores apiece to reach the 32-core total. 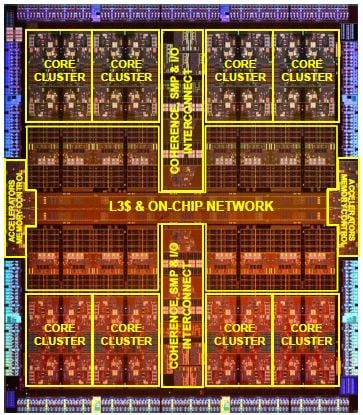 The die for Oracle's SPARC M7 CPU.
There's TEN BEEELLION transistors on it

There's 64MB of on-chip L3 cache, shared among all the cores and partitioned into 8 x 8 MB chunks. All up, “aggregate bandwidth for the L3 cache on the chip is over 1.6TB/s.” 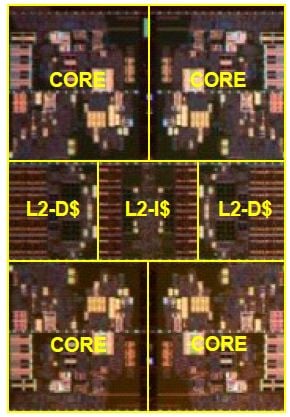 Inside a SPARC M7 core cluster

Extensibility is provided by “7 coherence links” per M7, which allows “8 of these chips to be connected together gluelessly.” There's more: Oracle says “32 of these chips can be connected in an SMP configuration. A potential system with 32 chips will have 1024 cores and 8192 threads and 64 TB of RAM.”

Another significant feature is the ability to decompress data at the speed of memory access. Oracle says that will mean the M7 can “directly work on compressed data in memory”. The feature is put into play by a new “M7 Database In-Memory Query Accelerator” that oracle says speeds some database functions.

Oracle is being vague about just when the M7 will land. “2015” is the only guidance on offer at present. But the company is also promising hardware to put the M7 to work in the same year.

Nor is Big Red discussing clock speed, but told former Vulture Timothy Prickett Morgan that the M7 can be expected to clock in faster than the current SPARC M6's 3.6GHz.

At that speed even a single M7 will be capable of mighty deeds.

32 of them in harness might just be dangerously close to Skynet. ®