'Aaaah FFS, 'amazeballs' has made it into the Oxford English Dictionary

Plus: 'EE, how shocking, another problem I face with your service' 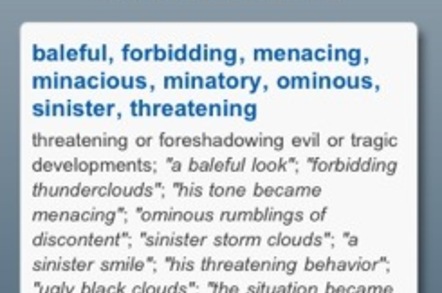 QuoTW This was the week when so-called “sharing economy” car firms – more accurately “slightly different ways to turn a profit” car firms – Uber and Lyft got into a bit of a barney. Lyft told CNN that Uber staff were pranking the company out of profits by ordering rides and then cancelling them, as well as ordering Lyft services for a short drive during which they pitched at the driver to switch to Uber.

It's unfortunate for affected community members that they have used these tactics, as it wastes a driver's time and impacts the next passenger waiting for that driver. We remain focused on growing the business faster than any competitor through better customer experience and innovation.

But Uber was not going to take that sort of thing lying down. A spokesperson told The Register:

Lyft’s claims against Uber are baseless and simply untrue. Furthermore Lyft’s own drivers and employees... have cancelled 12,900 trips on Uber. But instead of providing the long list of questionable tactics that Lyft has used over the years, we are focusing on building and maintaining the best platform for both consumers and drivers.

Lyft struck back again, telling El Reg that Uber was trying to “deceive the public” and anyway, it was just jealous:

Lyft has more than 100 investors, all of whom are extremely excited that Lyft is approaching IPO-level revenue. Our 'nuclear' strategy is continuing to take market share with 30 per cent month-over-month growth, while building the strongest community of drivers and passengers.

It seemed like this was a week to have a bit of a stumble in service after a number of sites and services toppling over. Brit mobe network EE dropped under the weight of some sort of PDP authentication failure error, causing connectivity throughout the country to wobble. In the absence of info from the network, tweeters reached out to each other for solace:

If you’re on @EE and you’re getting a “PDP authentication error”, you’re not alone - INTERNET OUTAGE! http://t.co/q5AwZ4ReaC #EE

@EE PDP authentication error...just another instance of an EE f**k up, another one to add to a very long list! Fed up&unhappy!Crap service!

@EE oh how shocking, ANOTHER problem I face with your service... It's every single week now!!!!!!!!!

Finally, the network acknowledged the mobile-bereft with a tweet saying it was aware of the issue and this statement to The Reg:

We apologise to those customers who are experiencing problems accessing data and sending MMS messages. We have identified the cause at one of our data centres and we’re resolving the issue as quickly as possible. We are sorry for any inconvenience.

Password management service LastPass also took a fall this week, leaving folks locked out of their accounts – including enterprise customers who couldn’t sign in for work. Reg reader Tim Stephenson, head of IT at Liftshare, said:

We started using LP for secure password management about a year back and have a number of systems that accept LP Single Sign On for convenience. Very, very annoying and currently LP seem to be saying nothing whatsoever to their users. Disappointing as a paid-for enterprise customer.

While Twitterers also voiced their concerns:

@LastPass Since this morning I can't login.. 4 hours and still no response from your helpdesk. Premium member here. Can somebody care plz?

LastPass told The Reg that one of its data centres fell over:

We immediately started taking action to migrate the service to run entirely on a different data centre - in the meantime, a percentage of our user base did experience connection errors with the LastPass service. We have been engaged with our provider the entire time and have been working with them to resolve the issues. We have done everything we can to minimise impact and are working to get the redundant data centre up as soon as possible.

In the legal world, Apple is facing a lawsuit from its own shareholders over the no-poaching-pact with fellow Silicon Valley firms. The suit claims that the firm misled investors and damaged the value of the company by getting involved in the underhand scheme. The court filings point out the role of the late Steve Jobs in the pact and list his estate in the defendants:

Jobs's conduct is a reminder that even widely respected businessmen can knowingly commit unlawful acts in the zealous pursuit of profits. In this case, Jobs and the other Individual Defendants knowingly caused Apple to enter into agreements that violated California law and US antitrust laws.

And network software vendor NetScout is feeling aggrieved at its lowly position in Gartner’s magic quadrant. The company is suing the analyst firm, claiming that it awards places in the magical marketing tool to those who spend the big bucks. Its filing alleged:

Gartner is not independent, objective or unbiased and its business model is extortionate by its very nature.

And finally, the English-speaking world reverberated to a cry of horror and longing for the halcyon days before words like ‘yolo’, ‘cray’ and ‘amazeballs’ were listed in the Oxford English Dictionary. A plethora of new words were added to the arbiter of our language that most people would rather had never been uttered in the first place, not to mind enshrined forever as an example of the Queen's English. Some totally not over-reacting Twitterers responded:

(This is True) Just added to the Oxford Dictionary Datebase: "YOLO", "FML", and "Amazeballs".. So.. maybe THIS is why the terrorists hate us

Aaaah, for f*** sake, 'amazeballs' has made into the Oxford dictionary. I give up society you're on your own! See ya!