Not paying Murdoch? You're gonna get a right LEGALLING - thanks to automated software 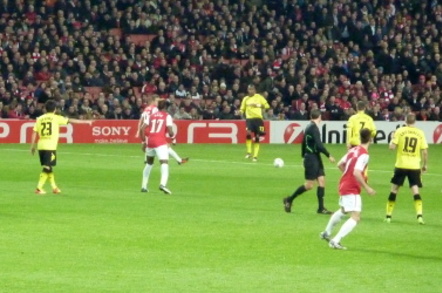 The English Premier League is working to design new software which will stop piratical football fans uploading footage of goals to Vine or social media.

It has apologised for being a "killjoy" after warning fans that spaffing images of goals all over the internet is a breach of copyright.

Now it is developing software to search and destroy illegal videos of balls hitting the back of nets.

Dan Johnson, director of communications at the Premier League, said: "You can understand that fans see something, they can capture it, they can share it, but ultimately it is against the law.

"It's a breach of copyright and we would discourage fans from doing it, we're developing technologies like gif crawlers, Vine crawlers, working with Twitter to look to curtail this kind of activity."

He added: "I know it sounds as if we're killjoys but we have to protect our intellectual property."

Balls are big business in Blighty, with BSkyB and BT locked into a vicious struggle to win the eyes of footie fans across the nation.

The online rights are owned by Rupert Murdoch's The Sun and The Times newspapers, which both skulk behind paywalls and want football action to stay as hidden as the rest of their content.

Dean Scoggins, deputy head of sport at The Sun, told the Beeb: "It's important to underline that it's illegal to do this, we've obviously signed a very big deal with the Premier League to be a rights holder and to show it, we've got legal teams talking with them about what we can do."

The other key battle in the footie world is between the officially sanctioned networks and pirates offering games for free over the internet.

Punters are now getting more matches so we've got better things to do, says regulator

Virgin Media: UK fans pay the most for the fewest matches