Just when you thought you were alone in the bath: Hi-res mapping satellite ready for launch

Will beam back images of objects as small as 30cm 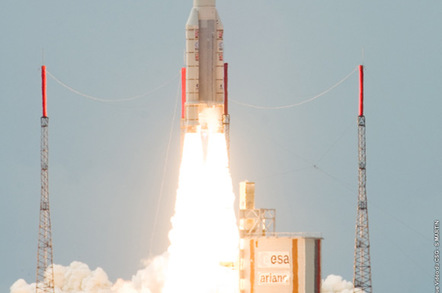 An American firm is preparing to launch a satellite which will map the world in a higher resolution than the public has ever seen before.

Tomorrow, DigitalGlobe expects to send its WorldView-3 satellite into orbit, where it will begin sending images of objects as small as 30cm in size.

It will zoom up to space from Vandenberg Air Force Base, California, and once in orbit, will begin taking snapshots of approximately 680,000km2 of the Earth every single day.

The non-military firm is only allowed to do this following Washington's decision to relax rules governing the maximum resolution of satellite images.

The updated approvals will permit DigitalGlobe to sell imagery to all of its customers at up to 0.25m panchromatic and 1.0m multispectral ground sample distance (GSD) beginning six months after its next satellite WorldView-3 is operational.

Previously, space companies were only allowed to sell images of objects smaller than 50cm to the US government or military.

DigitalGlobe also plans to send yet another satellite into orbit in 2016. WorldView 4 will be capable of capturing objects which are just 25cm across.

Happily, you need not worry about being snapped in your full glory. The satellite won't be able to see the average-sized male member which, according to the NHS, is about 14-16cm long, nor will it be able to make out women's genitals, or indeed, secondary sex characteristics.

"As a result of the U.S. Government’s recent decision to allow us to sell our highest quality imagery, we’ve seen sufficient demand that justifies the accelerated launch of WorldView 4,” said Jeffrey R. Tarr, President and Chief Executive Officer of DigitalGlobe.

DigitalGlobe are known as the company which produced much of the imagery used in Google Maps.

To watch the launch of WorldView 3, click here. It is expected to launch today or tomorrow, depending on the weather. ®