The current state of the art, apparently 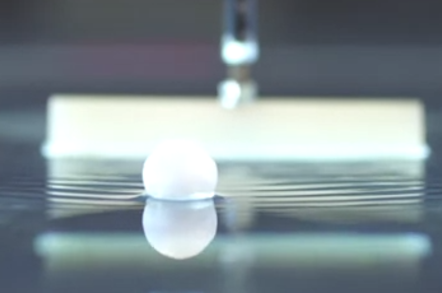 Video The Starship Enterprise won't be deploying a tractor beam in space any time soon, but in what could be a boon for people trying to control oil spills, Australian National University physicists have created a tractor beam in water with simple wave generators.

Their demonstration (video at the bottom) shows the ANU boffins controlling the movements of ping-pong balls on waves in water: as well as moving in the direction of the wave (as you'd expect), the ball can be held stationary or made to move against the wave.

The secret is the way waves create small surface currents on the water. The ANU's announcement says that particle tracking tools developed Dr Nicolas Francis and Dr Hua Xia revealed these surface currents, giving them the key to exploiting them to control the balls' motion.

In the demonstration video, the researchers vary the size and frequency of the waves to create the currents needed to control the balls.

Team leader professor Michael Shats explains that “above a certain height, these complex three-dimensional waves generate flow patterns on the surface of the water. The tractor beam is just one of the patterns, they can be inward flows, outward flows or vortices.”

Having observed the phenomenon, the researchers say one of the next steps will be to create a mathematical theory to explain what's going on (which would help improve the behaviour of the “tractor beam” in future iterations). ®