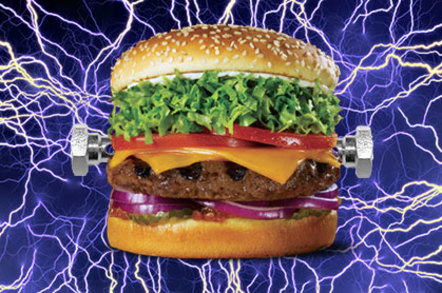 The good burghers of TGI Friday’s have cooked up a plan to get you in and out of their eateries faster: using mobile tech.

The restaurant's Manchester Piccadilly Station branch is the first Fast Track TGI Friday's, which aims to serve you within ten minutes and help you pay quickly and leave by using your mobile phone.

This is in stark contrast to the (possibly apocryphal)New York restaurant which found that tech was slowing down service.

To help you make the most of the few minutes you have while waiting, the new TGI Friday's branch has power sockets, Wi-Fi and USB charging sockets on the tables. You’ll no doubt get distracted from your Outlook and PowerPoint by the theatre of the open plan kitchen.

To help you pay quickly there is a mobile phone based payment system that uses QR codes from mobile payments company Zapper. This only really suits regular customers as it’s necessary to install the Zapper app (iOS, Android and Windows Phone) and register your credit card to the app. When the bill appears you scan the QR code with the app and pay.

Jane Sadler, general manager for TGI Friday's Manchester Piccadilly, commented: "It's a great pleasure to be opening the first of Fridays' 'fast track' restaurants, and it couldn't be a more perfect location than in one of the busiest railway stations in the country."

TGI Friday's is not alone in exploring tech. Pizza Hut has looked at using a Microsoft Surface style table as the video above shows.

Video of Pizza Hut and Chaotic Moon's collaboration. It features a really funky interactive restaurant table that lets you order pizza by drawing on the table (which looks and works like a giant smartphone screen) with your fingers. You can also play games with your table mates while you wait for your order.

Getting people in and out of a railway station restaurant quickly is clearly hugely valuable for both the restaurateur and the diner, but it remains to be seen how customers react to being fed spam after they have used the mobile payment app. ®