Turns out IDS is actually useful for something 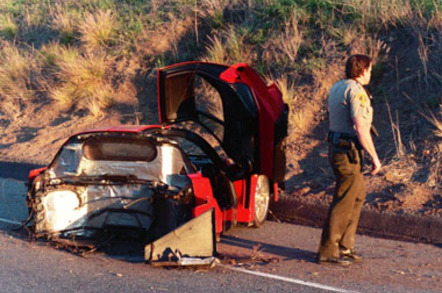 Black Hat 2014 At last year’s Black Hat USA, Charlie Miller, security engineer at Twitter and Apple-cracker extraordinaire, and Chris Valasek, director of security intelligence at IOActive, showed delegates how to hack a car. This year they demoed a system that can stop any such hacks dead.

Over the past 12 months, the duo have been going through publicly available information about car systems and hacking their own vehicles. The results of their research is that while it is possible to remotely hack – and in some cases take limited control of a vehicle – it’s very difficult and will only work with certain models.

All car computer systems share common features, principally at least one controller area network (CAN) that shuffles messages between various computer systems on the car, such as brake sensors and radios. While these are hackable, that’s not the whole story.

For a start, only a few cars allow computer control of the steering, acceleration, and braking systems of the car. Typically these are installed to handle features like automatic parking, adaptive cruise control and collision-avoidance systems.

But the pair found a wide variation among manufacturers in the network design and security protocols used. For example, most CANs can receive messages from one part of the car and not just route that data to a control system, but interpret it and rewrite it before forwarding it on.

More than a few car manufacturers isolate the systems for controlling things like acceleration and steering on a separate CAN so that commands can’t be directed to them from other parts of the car. Other models use a privilege system so that messages from minor units can’t communicate with safety-critical ones.

Web browsers in cars – we know where this is going

The problem is that cars are becoming more heavily computerized and that leads to more networking so the driver and passengers can get access to up-to-date information while on the move: most newish cars have a Bluetooth system hidden inside, a connection to the cellular data network, and so on.

Now manufacturers are building web browsers into cars, which brings the world to your fingertips but introduces a whole different security ballgame. It's now easy for an attacker to find his or her way into a car from the other side of the planet and run code on it, we're told.

"Once you add a web browser to a car, it's open," Miller told the conference in Las Vegas on Wednesday. "I may not be able to write a Bluetooth exploit, but I know I can exploit web browsers."

The security of the networking aside, there are other problems: patching is a major issue. It’s hard enough to get computer users to patch, but when you've got drive to a dealership for a software security upgrade, people are likely not to bother.

But, as it turns out, protecting against car hacking is a relatively simple matter, and the two have put together a cheap little board and software – dubbed the Can-no hackalator 3000 – which can be fitted to any car – or so we're told – and stop hacks using a old, and much maligned, piece of security software: an intrusion detection system.

"IDS sucks in computers, but it turns out they work for cars because cars are simple," said Miller.

While IDS systems on big networks can fail to spot dodgy traffic, with cars the networks are so basic and the messages sent so simple that an IDS system is really effective. Furthermore the device is car agnostic and very easy to use, it was claimed.

The two showed a video of the Can-no hackalator 3000 plugged into a car’s network, where it spent about ten seconds scanning the system and learning how and what messages are in circulation.

When a hack of the car was attempted, the Can-no hackalator 3000 detected it immediately and blocked computer control of the car’s functions just in case. While the car is manually drivable in this state, features like adaptive cruise control won't work. Compare that inconvenience to a fiery ball of death, however. ®