Slasher pics may be too much for the weak-hearted 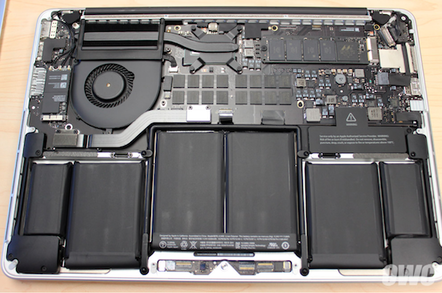 An Apple upgrade outfitter has exposed the new Macbook Retina to the world, cracking it open for a teardown just days after its release.

The new Macbook surged from Cupertino like an avenging spirit last week, surprising almost no one with its promise of slightly improved performance.

Now the first brave soul has attacked it with a screwdriver, tearing it down to allow Apple fans a look at its most private parts. The bods at OWC became the first to peer inside the two new Macbooks' silvery bodies.

What we really need to know is whether memory or the processor are soldered in, making upgrades more or less impossible. But the teardown dons didn't reveal this key piece of info.

The full list of changes for the latest versions of the Macbook can be viewed here. It's fair to say they can be summed up thus: the new Macbooks are pretty much the same price, shape and with the same ports.

So have you bought one of these new Macbook Retinas? Get into the comments and let us know what you think of it. ®

For a wee joke The Register tried to build the most expensive Macbook we could, adding a 1TB hard drive, 2.8GHz i7 chip and a DVD drive, which have been unreasonably banished from modern day Macbooks. Its cost was £2,614.00, proving that the juiciest fruit is only available to the richest of folk.