>Beep< This vehicle is accelerating 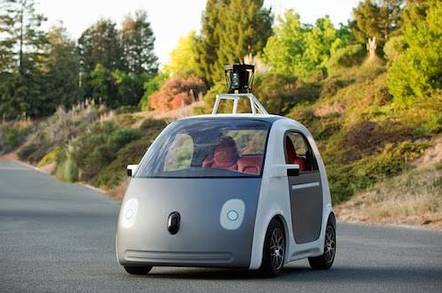 Robotic cars are set to prowl the streets of Britain by next January without human supervision – as Westminster prepares new rules to allow autonomous vehicles on the public highways of this sceptr'd isle.

Today, driverless cars are only allowed to travel on private roads. New laws will allow them out to motor across the streets and thoroughfares of Great Britain.

British cities can bid for a share of a £10m competition to host an autonomous car trial, which will run in three cities for between 18 and 36 months.

Cable said: “Today’s announcement will see driverless cars take to our streets in less than six months, putting us at the forefront of this transformational technology and opening up new opportunities for our economy and society.

The new legislation covers cars which can operate without a driver, as well as autos which allow a human passenger to wrest control of the vehicle in an emergency.

It is hoped the new regulations will help Britain to become a centre of research into this potentially huge industry.

Science minister Greg Clark added: “Britain is brilliantly placed to lead the world in driverless technology. It combines our strengths in cars, satellites, big data and urban design; with huge potential benefits for future jobs and for the consumer.”

So what cars can we expect to see on the road? One of the UK's most prominent robotic car projects is currently under way at Oxford University's Mobile Robotics Group.

We asked Oxford's brainboxes whether it would be taking advantage of the new rules but a spokeswoman told us their project was very much at the "testing phase". Whilst a homegrown driverless car would certainly be unleashed upon Britain's roads at some point, it probably won't happen by next January.

The Transport Catapult, a government-funded organisation dedicated to devising new ways of getting us moving, is already testing driverless cars in Milton Keynes. However, the public-funded body's mouthpiece said work on these vehicles would be unaffected by the new laws because they drive on the pavement. Testing is able to go ahead due to an agreement with Milton Keynes council and new legislation will not affect this.

We understand the Catapult is considering funding a road-based driverless car project, but it has not yet been decided where to funnel the money.

The British Army also uses automated vehicles designed by a firm called Mira. These include the Unmanned Ground Vehicle Panama, which is used to sniff out improvised explosive devices.

Google has a long-standing interest in autonomous vehicles, although Vulture Central's own petrolheads reckon the auto-cars could just end up clogging our streets up even more.

AA president Edmund King said drivers are not yet ready to surrender control to a robot.

"Many drivers are still resistant to change as 65 per cent enjoy driving too much to ever want the vehicle to take over from them,” he said.

“Cars have become more automated. However, there needs to be a big leap of faith by drivers from embracing assistance systems to accepting the fully automated car.”

Volvo is one of the firms currently working to develop a autonomous car.

Nick Connor, managing director of Volvo Car UK, said his firm was working on a trial in Gothenburg: “The support of national and local government is crucial if we are to demonstrate the real life-changing potential of this technology and encourage adoption from the public. Driverless cars aren’t pie in the sky or innovation for its own sake. They can make our roads safer, our air cleaner and our cities less congested. Innovations in our current cars, such as autonomous emergency braking, adaptive cruise control and self-parking, precursors of fully driverless cars, are already making a positive difference to drivers’ experiences."

Key to Volvo's efforts is protecting humans from robo-cars gone crazy. “For us, this is a natural evolution of our human-centric philosophy and an important part of our vision that by 2020 no one should be killed or seriously hurt by a Volvo.” ®