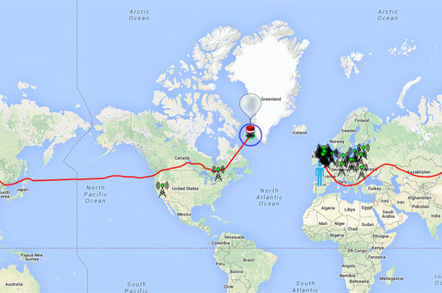 It's a tip of the hat today to Brit High Altitude Ballooning (HAB) bod Leo Bodnar, whose B-64 payload is poised to complete an epic 25,000km circumnavigation of the globe.

B-64 - comprising a 12g solar-powered radio tracker rig - lifted off on 12 July from near Silverstone, Northamptonshire. Its most recent position showed it menacing Greenland's airspace ahead of an expected return to British skies in the next couple of days. 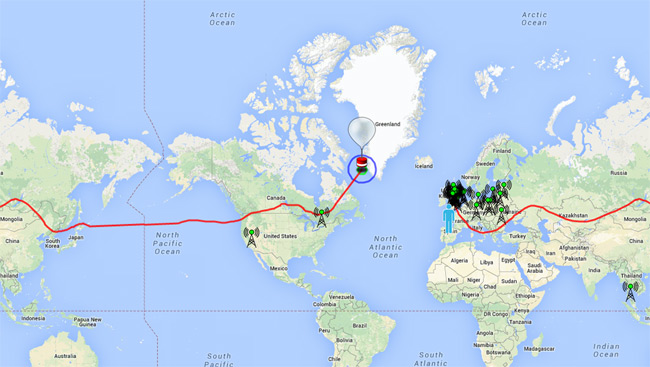 The flight was tracked by radio amateurs, and where contact was lost, the payload recorded its path for later report over the APRS (Automatic Packet Reporting System) network - hence the impressively unbroken record of its epic journey.

Along the way, B-64 dipped briefly into the Med, avoided North Korea, and paid a fleeting visit to the US of A before deciding Canada offered a better route home.

Leo also has a second payload, B-63, in the air, although that's currently still over Canada, having taken a leisurely sightseeing tour of the country's northern reaches.

Leo's a bit of a dab hand at such ultralight payload treks. In September last year, he send aloft B-11 and B-12, which traced provocative paths across the heavens above Europe. ®

Up, up and a-weigh! Boeing flies cargo drone with 225kg payload

No word on demo bird's range or speed, but the carrying capacity looks decent

How do you solve a problem like Galileo? With a strap-on L-band payload, of course!

Nigerian and Brit augmented boffinry could save billions