Scotland's BIG question: Will independence cost me my broadband?

They can take our lives, but they'll never take our SPECTRUM 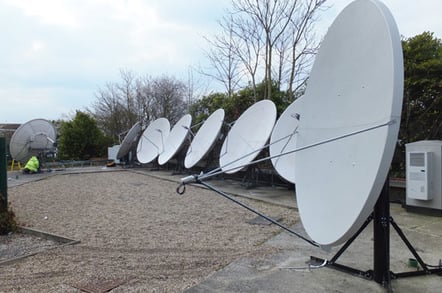 Feature On 18 September, the people living in Scotland will vote in a referendum to decide if we should to slice the top off Great Britain and create a separate country. If that happens, and once the locals sober up, Scotland could be a country with universal broadband, a publicly owned postal service and mobile coverage which would be the envy of the world, assuming it can create a regulator capable of doing all that.

An independent Scotland will need all manner of regulators – replicating the environment handed down from Westminster – but of particular interest to Register readers (and your correspondent) is Ofcom – the Office of Communications – and Scottish plans to completely rethink how communications is managed north of the border.

Regular readers will know of my reliance on a microwave connection for anything approaching broadband speeds, but that link is only possible thanks to a licence issued by the (Westminster-based) Office of Communication – prompting my interest on how things will develop, should Scotland cast itself adrift.

It's not just microwave links which will be thrown into confusion by detaching the northern UK. The Scottish Government wants to force the mobile operators into improving rural coverage, and plans to spend £75m building a new digital-TV multiplex full of Scottish content. Not to mention buying the post office back into national ownership, and (perhaps) adding broadband to BT's Universal Service Agreement, so everyone in the newly formed country will be able to get broadband.

We don't know exactly what will happen, of course, because we don't know who would run an independent Scotland. The vote on 18 September is a simple decision on separation, once that has been approved then the all-too-fissiparous "Yes" coalition will quickly disintegrate into factions which have no commonality beyond the desire for independence.

The political landscape beyond that point is open to rigorous debate. Alex Salmond and his Nationalists will probably do OK, given their ability to claim a victory. However, it would be foolish to discount Labour, and even the Lib Dems, who've both traditionally enjoyed Scottish support. So the exact makeup of a national government in Edinburgh is entirely unpredictable.

Still, we do know what the incumbent has in mind, as the devolved parliament has published various documents outlining how it sees an independent Scotland operating. None of those are backed by legislation, but they do represent the intentions of the Edinburgh political elite, and the existing Scottish parliament, so can be taken as fair indication of what will happen.

A new Ofcom for a new Scotland?

Ofcom licenses radio bands, but also keeps track of unlicensed bands and investigates illegitimate use, when it's not checking for nipple-slips on pre-watershed TV broadcasts, or counting how many letters were delivered on time, or how many copies of Game of Thrones have been torrented. The regulator also tries to make sure "Broadband" is really broad, and keeps on top of the latest technical developments in communications.

The Scottish version will have to do all that too, but Scotland is planning to save costs by amalgamating even more responsibilities into a single regulator. An independent Scotland will be a much smaller country than the UK and is taking its lead from Sweden in regulatory structure. The document Economic and Competition Regulation in an Independent Scotland [PDF] – published by the devolved parliament in Edinburgh – identifies six UK regulatory bodies. It lays out a number of options for creating a mirrored infrastructure, or combining them into a single super-regulator, along with various compromise options in between. 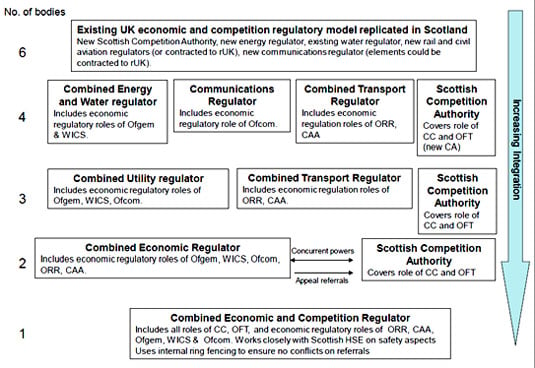 Combining regulators will, the Scots hope, save money. The same document points to National Audit Office figures which calculate that Ofcom has been 10-13 per cent cheaper to run than the five bodies it replaced, though it admits that much of the saving came from efficiencies unrelated to the merger.

Next page: How Scottish can the airwaves be?
Page:
Tips and corrections
204 Comments