China in MONOPOLY PROBE into Microsoft: Do not pass GO, do not collect 200 yuan

Or do not pass 起点, if you prefer 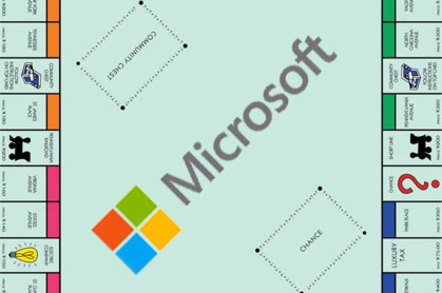 Chinese regulators have confirmed they are investigating Microsoft for possible breaches of anti-monopoly laws, following a series of surprise visits to Redmond's offices in cities across China on Monday.

In a Chinese-language statement posted to its website on Tuesday (see robo-translation), China's State Administration for Industry and Commerce (SAIC) said that the shock swoops were part of an ongoing investigation, and that preliminary inquiries had not been sufficient to clear Microsoft from suspicion.

Just what China has accused Redmond of doing isn't entirely clear, but SAIC's statement indicated it had something to do with Microsoft allegedly tying its Office productivity suite to its Windows operating system.

Microsoft's Chinese lawyers were reportedly on hand to supervise the enforcement activity.

Under Chinese law, SAIC's investigation of Microsoft's alleged monopoly behavior is a criminal matter. If found guilty, the software giant could face fines of up to 10 per cent of its revenues, among other sanctions.

Further pain in the Middle Kingdom

That would only be the latest setback for Microsoft in China, where it has consistently been disappointed by an underperforming software market. Former CEO Steve Ballmer reportedly once told employees that Redmond makes less money in China than it does in the Netherlands, despite China having 80 times the population.

A big reason for that is software piracy. According to the most recent study by the Business Software Alliance, an industry pressure group, nearly three-quarters of all software in China is being used without a valid license.

But according to some analysts, just because piracy is rampant in China doesn't mean Redmond doesn't have a monopoly position in the Chinese software market. China relies heavily on Microsoft's software – legally licensed or not – which could make it difficult for local competitors to gain a foothold.

While there have been several attempts to get Chinese punters to switch to Linux – including Red Flag Linux and the unimaginatively named China Operating System – none have been particularly successful at shaking off Windows' dominance.

To its credit, the Chinese government has said it will spend millions to replace pirated software in government offices with the genuine article. But it has also claimed that Windows 8 is too expensive for Chinese customers, and that if users were forced to upgrade for compatibility's sake it would only lead to more piracy.

Microsoft isn't the only Western tech company that has struggled with Chinese regulators and market conditions, either. Just last week, China's National Development and Reform Commission said that it believes Qualcomm has a monopoly in the country, but that it had not yet determined whether the chipmaker has abused that position. Meanwhile, Qualcomm has said that it believes Chinese firms are flouting their licensing agreements for its patents, much as they are violating Microsoft's copyrights.

For its part, the Chinese government has said that the problem of intellectual property theft in China has been overblown by Western media and it has accused US tech companies of conspiring with intelligence agencies to plant backdoors in key Chinese information systems.

SAIC says that its investigation into Redmond's business practices is ongoing and it has asked Microsoft officials located outside of China to comply with its inquiries. Microsoft has declined to discuss the matter, citing the "sensitivity" of the issues involved. ®

Yes, we could have used 走 or 前往 in the headline for "Go", but instead we opted for the characters used on an actual Chinese Monopoly board on the Go square. So there.