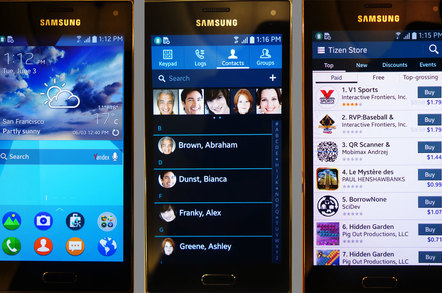 Samsung has postponed the launch of its new Samsung Z smartphone yet again, and given no indication of when we'll ever see the Tizen OS mobe on sale.

The move delays the Samsung Z's world debut in Russia.

The Linux-powered Z has been doing the rounds of developer conferences and events, but has yet to be spotted in the wild. The South Korean firm said in an emailed statement that the delay was necessary “to further enhance the Tizen ecosystem”.

“Samsung will continue to actively work with Tizen Association members pursuing to further develop both Tizen OS and the Tizen ecosystem,” the Korean chaebol said.

Sammy was originally planning to launch the device as a Russian-only exclusive at the Moscow Tizen Developer Summit, but showed up at the event with show and tell models only. The firm didn’t give any reason for the delay, just saying that the Z should be expected on the Russian market later when it had the “fullest portfolio” of apps to offer.

Now the company is delaying the launch again with more or less the same reasoning, to develop the new OS’s ecosystem further.

In order to get a mobile OS together that has even a vague hope of competing with behemoths like Android and iOS, Sammy needs to get developers making apps for Tizen. But, as fellow Reg hack Neil McAllister pointed out, it’s as tough to get devs making apps for phones that don’t yet exist as it is to launch phones without apps.

The latest lot of delays come after Samsung promised Tizen mobes last year and failed to deliver, although it has gotten some smart cameras and wearables out that use the Linux-based OS.

The firm did not give any new timeframe for the release of the Z. ®

No one wants new phones – it's chips that keep Samsung chugging

I'll keep the smartie I've got, thanks

Surprising absolutely no one at all, Samsung's folding-screen phones knackered within days