Batten down the hatch- ... oh. Quantum's actually close to growth

Keep it up, lads, and you might get yourselves back to black 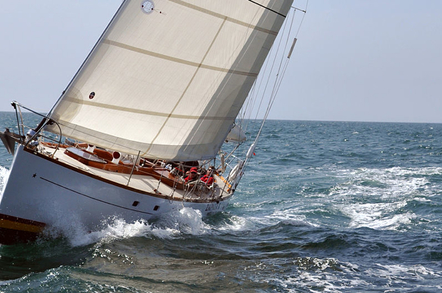 The top-line numbers don’t show it. First quarter fiscal 2015 revenues were $128.1m, almost $20m down on the year-ago quarter and a smidge up, just $100,000, on the previous quarter. There was the expected loss of $4.3m, which was worse than last year’s $3m profit but better than the previous quarter’s whopping $14.4m loss.

That $3m profit was unusual because Quantum received a $15m royalty payment from Microsoft last year which skewed things. The firm itself admits that without this one-off sum, its revenues were down four per cent. This would have meant a nominal $12m loss and the latest quarter’s $4.3m loss would be seen as a big improvement on that.

The business is struggling to float the lead zeppelin that is tape automation sales. The sector is far too large to abandon but carries on shrinking – or sinking, to continue the metaphor. As tape reverts to being an archive instead of a backup medium, the overall tape market is losing the backup data stream.

Jon Gacek, Quantum’s president and CEO, referred to the long grind of the recent past in his prepared remarks about the results: “Our strong first quarter results reflect the adjustments in our business model and other strategic actions we've taken over the past five quarters to drive shareholder value by generating increased profit and cash flow while positioning the company to deliver overall revenue growth.”

Underneath Quantum’s top line there were encouraging signs. Scale-out storage revenue grew 41 per cent to $18.1m, the highest quarterly level to date, showing strength in sales of StorNext appliances. A $3m+ StorNext and Lattus deal was closed in the quarter and DXI deduplicating appliance sales were strong – especially as the DXi range has just been refreshed.

The new DXi4700 brought in customers new to Quantum – nearly 60 per cent of those buying it coming to Quantum for the first time.

Gacek expects revenues next quarter to be between $130m and $135m; they were $131m in the previous year's second quarter. The second quarter is traditionally stronger than Quantum’s first quarter so we can’t read anything special into that.

If the third quarter of fiscal 2015 can beat last year’s $146m or the financial 2015 fourth quarter beats last year’s $128m, then Quantum will have turned the corner and be seeing growth. Yes, Growth, capital emphasis and all. It will have been a long time coming – but all the sweeter because of that.

Back to the question: is the upturn visible? Not yet but it's close, oh so close. Cross your fingers, Quantum investors, and hope their tightly run ship does the business. ®

Now that it's not Windows-only, you can simulate a theoretical computer on a real computer