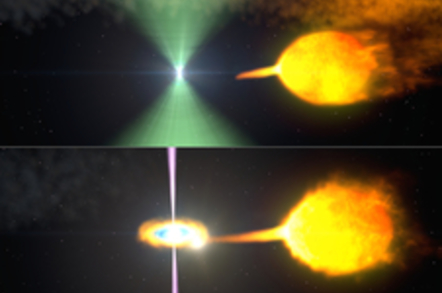 Video “Where did it go?” is the kind of question astrophysicists love to answer, and work by NASA's Fermi gamma-ray space telescope has helped find out what happened to a radio pulsar that seemed to go dark in 2013.

The mystery arose in June 2013: a pulsar's radio beacon vanished to be replaced by a huge increase in its gamma ray output. The AY Sextantis system consists of a star about one-fifth the mass of Sol, paired with a neutron star named PSR J1023+0038, The latter is so close to its big brother that it orbits in just 4.8 hours and is evaporating its companion.

J1023's binary nature means astronomers have been keen on it since it was discovered in 2007 by Anne Archibald of ASTRON in the Netherlands. Observers were monitoring the pulsar to study its spin and orbital evolution, NASA http://www.nasa.gov/content/goddard/nasas-fermi-finds-a-transformer-pulsar/ explains, which is why they were watching when the pulsar's radio signal turned off.

That event, NASA says, sparked the shift to a search in the gamma spectrum, and a paper published in The Astrophysical Journal (abstract here, Arxiv pre-print here).

What's got the boffins excited about this discovery is that it gives them the chance to observe a transitional phase in a pulsar's evolution. As Archibald explained in the NASA statement: “Astronomers have long suspected millisecond pulsars were spun up through the transfer and accumulation of matter from their companion stars, so we often refer to them as recycled pulsars”. 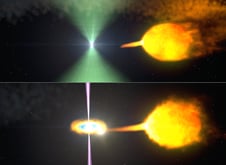 Suck on this: when the star's gas flows overcome

J1023's behaviour is quite similar to that of the “Transformer pulsar” J1824, which flips between radio and X-ray emissions.

In the case of J1023, the Fermi data suggests that the radio waves are being blocked by gas in the accretion disk formed around the pulsar. Most of the time, the huge energy generated by the pulsar's spin causes a “wind” of near-light-speed particles – and this wind holds the gases from the companion star at bay.

“Gas in the disk becomes compressed and heated, reaching temperatures hot enough to emit X-rays. Next, material along the inner edge of the disk quickly loses orbital energy and descends toward the pulsar. When it falls to an altitude of about 50 miles (80 km), processes involved in creating the radio beam are either shut down or, more likely, obscured”, the NASA statement says.

Meanwhile, the gamma rays that have taken the place of the radio emissions are probably the result of shock waves along the periphery of the pulsar's particle jets, which are being emitted at close to the speed of light.

That makes the system, a more 4,000 light-years or so distant, a handy laboratory for studying the formation both of the accretion process and the formation of millisecond pulsars. ®