E7-8895 v2 chips are best of the bunch, and with firmware-unlocked speed control 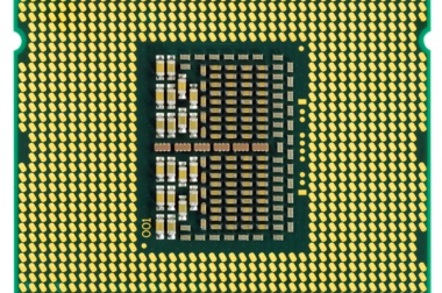 Intel has gone through its fabs and found the greatest possible Xeons, tweaked its firmware, and sold 'em off to Oracle.

The two companies announced on Thursday that they had partnered to work on a Xeon chip whose cores can be turned on or off and clock rate manipulated by Oracle's software.

The Xeon E7-8895 v2 SKU was tweaked by Intel to allow the database giant's code to choose how many of the chip's 15 cores to use at any given time, and at what clock rate (thank you Turbo Boost), putting those not used in a "idle, low-power state," Intel enterprise marketing chap Pat Buddenbaum told El Reg.

Though these three features – clock rate manipulation with Turbo Boost, selective power C-states, and the ability to dial-up and dial-down cores – have been available in prior Intel chips, this marks the first time they've all been available in a single Xeon, we're told.

This allows Oracle to run systems at full processing capacity when a heavy workload arrives, and spin down machines in quiet periods, all of which should save some energy. Also, the fewer cores used, the higher the clock frequency can go in Turboboost mode, which is useful for certain kinds of application.

Putting out the bins

Crucially, the CPUs must be able to reliably work over a range of clock frequencies, grouped into grades called "bins". One bin represents a 100MHz increment in clock frequency for the E7-8895 v2, Intel told us.

"Let's say this is a 15-core part at the outset, running under favorable conditions that allow for Turboboost: [it can run] at one bin or two bins to three bins above rated frequency," explained Xeon E7 Product Line Manager Ravi Ravishankar to The Register.

"Depending on all the conditions that enable that, you can hit any one of those points. Three bins is the maximum at the 15-core mark, but as you go lower, say to a six-core mode, then the maximum frequency within that particular situation is 3.4GHz. If, say, for some reason only one core is being used, then in that particular scenario you can go up to 3.6Ghz – that's the opportunistic upside if you had the least number of cores active."

Intel spent about a year working with Oracle to help the company tweak its software and schedulers to automatically scale core usage up and down, and make use of power management "C-state" technology that Intel made available through firmware tweaks, Chipzilla said.

"It's more through the unlocking of [features in] the chip, but also through our manufacturing process there will be a more stringent thermal profile required such that the chip supports all of these different modes," Buddenbaum told us.

This marks a continuation of one of Intel's major new strategies: customizing its high-margin server chips for specific customers, like eBay or Facebook. Another aspect of this is its more announcement of sitting FPGAs directly on top of Xeons for off-CPU acceleration.

Previously, Intel's customizations have involved power management and selecting some chips for particularly high sustained clock frequencies, but Buddenbaum believes this is the first time Intel has sold a chip with dynamic core-scaling targeted at servers.

Though Intel makes much of the customization here, it hasn't done anything from a hardware standpoint besides select for the best Xeons coming off the line. The magic is all in firmware unlocking chip features.

The new silicon will sit inside Oracle's just-announced Exadata Database Machine X4-8, which has been built for Oracle's "in-memory" database refresh.

This server is "specifically optimized for a new generation of workloads: database as a service (DBaaS) and database in-memory. With up to 12 terabytes (TB) of DRAM memory, the Exadata Database Machine X4-8 can consolidate hundreds of databases and can run massive databases entirely in-memory," Oracle says.

The machine can pack in 12TB of memory per rack, 672TB of disk storage and up to 44TB of PCIe-linked flash as well.