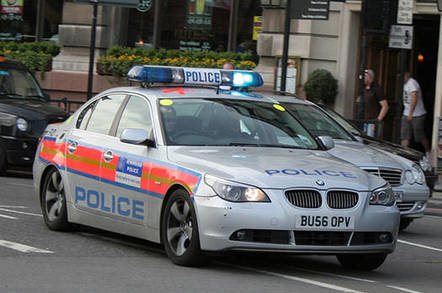 British cops used a new facial recognition system to snare a shoplifting suspect whom they say was automatically identified due to his resemblance to criminal relatives, The Register has learned.

In a development that may strike fear into members of well-known underworld families, Leicestershire plod told us a new system called NeoFace can finger crims simply by comparing their features to a database of snaps of arrested suspects.

The force are halfway through a six-month trial of the software, which uses facial recognition to help officers solve crimes. They spoke to the press about their experience for the first time this week, as other police forces paid close attention to the force's findings.

The Metropolitan Police Force is due to visit Leicestershire this week to scope out NeoFace, it is understood, while the Essex and Kent forces have already been to check out the system. French and Romanian officers have also been in contact to express an interest.

Although a positive identification is not enough evidence to result in a conviction, it helps officers in their line of enquiry. They could, for instance, carry out DNA checks on a crime scene or organise an identify parade, both of which carry weight in court.

Dave Harper, spokesperson for Leicestershire Police, told us that although the shoplifting suspect's case had not yet gone to trial, officers were delighted with the new system, which has been used in 200 cases.

"The officer came in with CCTV images of a shoplifting suspect he didn't recognise. We ran his image through the facial recognition system and his father and brother both popped up, because the family all have strong and shared facial characteristics."

Using the system is "more of an art than it is a science", because it still requires some level of human operation, he said.

It requires a front-facing, mugshot-style image, which greatly increases the chances of an accurate match. Images are automatically compared against a database of photographs of people the police have arrested - who can be innocent or guilty.

Cops are allowed to keep photographs for five years before deleting them, as long as the subject agrees. Leicestershire Police alone has pictures of 90,000 people on their system. If the system rolls out across the whole country, this could mean millions of people's pictures are available for analysis.

In the bad old days, police used to keep a massive book full of photographs, which cops and crime victims would root through to identify suspects - a process which could take days.

NeoFace speeds this up enormously.

"The system doesn't discriminate," Harper added. "Whether you are black or white, male or female, it works the same, looking for facial characteristics and them matching them. Perhaps a person has a mole or their ears are high up on their head. The system picks that up."

NeoFace was recently used to identify and arrest a man for carrying out two armed robberies on the Chicago Transit Authority train system last year. ®