But the party must go on 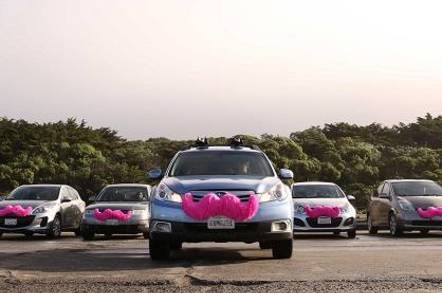 A Lyft spokesperson confirmed that the planned Friday launch would be moved to Monday as the biz continues to work with authorities on a plan that would allow Lyft drivers to operate in NYC without risk of police fines.

Lyft wanted to set its service loose at 7PM in Brooklyn and Queens. The company had planned a concert and party in Brooklyn to coincide with the kick-off.

City officials, however, had threatened to take action to block the launch. TLC had complained that Lyft did not register and therefore was operating unlicensed taxi service, a crime punishable by a fine up to $2,000 in New York.

"The public is reminded that they should not get into a vehicle without a TLC license, because it has not undergone the rigorous safety and emissions inspections conducted by the agency to ensure its safety and fitness for transporting passengers, and its driver has not been subject to the TLC’s required drug and background checks," the commission said in a statement earlier this week.

Siding with the TLC, New York Attorney General Eric Schneiderman filed a motion on Friday for a temporary restraining order (TRO) against the app company.

A Lyft spokesperson told El Reg that the startup had agreed to delay the service and the judge will adjourn the TRO proceedings until Monday. In the meantime, the company said it hopes to gain the approval of the TLC on a plan that would allow for a licensed Lyft service to launch in New York City.

"We agreed in New York State Supreme Court to put off the launch of Lyft's peer-to-peer model in New York City and we will not proceed with this model unless it complies with New York City Taxi and Limousine regulations," the company said.

"We will meet with the TLC beginning Monday to work on a new version of Lyft that is fully licensed by the TLC, and we will launch immediately upon the TLC's approval."

The party, at least, will still be held tonight. ®