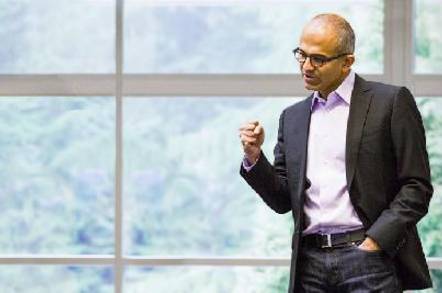 Comment Six months into his new job as Microsoft CEO, Satya Nadella has penned what we're supposed to believe is a memo to his troops.

Corporate missives to employees are generally hush-hush affairs, something enterprising journalists land by luck or skill.

The appearance of the document on the company's website means this is not an email meant only for employees, but rather a piece of PR that targets an outside audience. It's about as genuine as all those exec blogs "written" by a named exec.

Critics, partners, investors, the press, investors – anybody with a stake in the game who's been holding their breath waiting for Microsoft to break out or go under – have all read this piece of prose.

It has been six months since Nadella took over CEO role from Steve Ballmer, and the timing of this memo is clear.

Just in case you thought there was nothing going on since Nadella took over beyond nixing Cortana on non-Windows Phones and picking up where his predecessor left off in putting Office on the iPad: time to sit up, World. He's still there.

Nadella's memo reads less like a vital or strategic missive to staff and more like the end result of a period of intense marketing huddling.

The most important thing for marketing types at any company is to decide "who we are" and try to convey this to customers and rivals.

And you could argue that this is exactly what this document does.

According to Nadella, it's no longer enough to simply describe Microsoft as a mere devices and services company - the drumbeat under Ballmer. That's pitching it far too low.

No, here's how Nadella describes the new company, in a 35-word distillation of the past six months' huddle.

Microsoft is the productivity and platform company for the mobile-first and cloud-first world. We will re-invent productivity to empower every person and every organization on the planet to do more and achieve more.

Prepare yourself, this is the new Microsoft message. The new "core". From these simple words, Microsoft's new messaging and self justification will flow.

Microsoft likes this kind of messaging reboot. It did it on .NET, on three screens and a cloud, on being a devices and services company.

But what do these words actually mean?

Productivity and platform? That's what Microsoft was already doing. It was called Windows and Office and Office 365.

I didn't say there was anything new here. This is what such marketing huddles do: try to identify your core products or skills and dress them up.

Windows - client and server - and Office apps, along with the workhorse server and tools apps, remain Microsoft's biggest money-spinners.

The other thing you do with huddles is find ways to justify the non-core stuff. Marketing is about positioning yourself in the best light and turning weaknesses into strengths.

Which brings us to Xbox and Surface.

Xbox is staying. We've had speculation, rumours and pressure from Wall St on flogging Xbox. It was Steve Ballmer and the board's position that Xbox should stay. Now that's final.

I... want to share some additional thoughts on Xbox and its importance to Microsoft," Nadella wrote. "As a large company, I think it's critical to define the core, but it's important to make smart choices on other businesses in which we can have fundamental impact and success.

Microsoft will continue to vigorously innovate and delight gamers with Xbox. Xbox is one of the most revered consumer brands, with a growing online community and service, and a raving fan base.... bottom line, we will continue to innovate and grow our fan base with Xbox while also creating additive business value for Microsoft.

Second, the loss-making vanity exercise that is Surface will also stay put. Surface, at least for the purpose of this newly positioned Microsoft, has been branded "first-party hardware".

Slap on the back to the Microsoftee or messaging consultant who came up with that one.

"We will build first party hardware to stimulate more demand for the entire Windows ecosystem – that means at times we'll develop new categories like we did with Surface," Nadella said.

Next page: Is there nothing new in this? Funny you should mention that
Page:
Tips and corrections
46 Comments