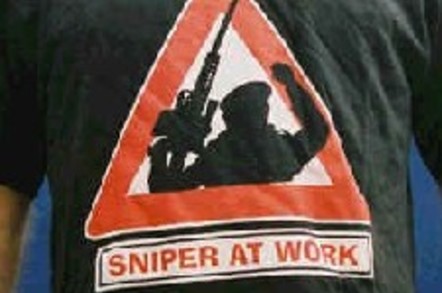 Video The military boffins at DARPA have just released footage of their first successful shots of a bullet dubbed EXACTO (EXtreme ACcuracy Tasked Ordnance) that can be steered onto a target when fired from a standard rifle.

The video, shot at a government firing range in February and April, shows two .50-cal rounds maneuvering in flight towards the target spot. The second manages two course corrections before hitting its target.

"This video shows EXACTO rounds maneuvering in flight to hit targets that are offset from where the sniper rifle is aimed," the DARPA team says.

"EXACTO’s specially designed ammunition and real-time optical guidance system help track and direct projectiles to their targets by compensating for weather, wind, target movement and other factors that could impede successful hits."

DARPA has been looking into steerable bullets since 2008, but the challenges are immense. Fitting electronics (including possibly GPS) and a steering mechanism is tough enough, but the unit also has to be strong enough to withstand the shock of being fired from the barrel of a gun.

The weaponsmiths at Sandia have already developed a steerable bullet that uses optical sensors in the tip and four controllable fins to reach its target. But that round needs a special smooth-bore gun to fire from, whereas EXACTO is designed to be fired by standard rifled .50-cal weaponry.

The initial purpose of EXACTO is to increase the range over which snipers can operate. The .50-cal round used by US military snipers can travel up to seven kilometres, but the current record distance for the caliber is 8,120ft, or 1.54 miles (2.4km) – set in 2010 by British Army sniper Corporal of Horse Craig Harrison.

But DARPA also envisages the bullet being used by the larger cannon carried on helicopters and armored vehicles. If practical, both technologically and economically, EXACTO could be used to vastly extend the range and accuracy of such weaponry. ®