BBC asks fans to EXTERMINATE copies before they materialise 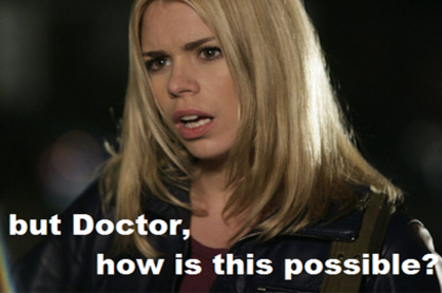 Scripts for the first five episodes of the yet-to-be-screened and highly-anticipated series eight of Doctor Who have been leaked online.

The leak is said to have come from BBC Worldwide's new Miami office, which was arranging translation of the new series for non-English speaking markets. The scripts are said to bear a BBC watermark, the name of a staffer and to be extremely detailed post-production scripts describing on-screen action as well as dialogue.

Unconfirmed rumours claimed the scripts were placed on a public server which was indexed by a search engine. An innocent search stumbled upon the scripts, which eventually made their way into torrents and sites such as Scribd.

The Reg shan't reveal any details, in line with the BBC's plea to keep the scripts under wraps.

"BBC Worldwide is currently investigating a security issue around Doctor Who Series 8 where unfinished material has inadvertently been made public. We deeply regret this and apologise to all the show's fans, the BBC and the cast and crew who have worked tirelessly making the series," the BBC said in a statement.

"We would like to make a plea to anyone who might have any of this material and spoilers associated with it not to share it with a wider audience so that everyone can enjoy the show as it should be seen when it launches."

Doctor Who screenwriter Mark Gatiss tweeted his frustration at the leak.

Doctor Who fan sites appear to be heeding the BBC's call. Jonathan Carlyle, identified by ABC radio as a moderator of Doctor Who forums, said he read the scripts, but only so it will be easier to find and delete spoilers posted to the boards he tends. ®