Your feedback on on the Vulture 2 spaceplane's forewings 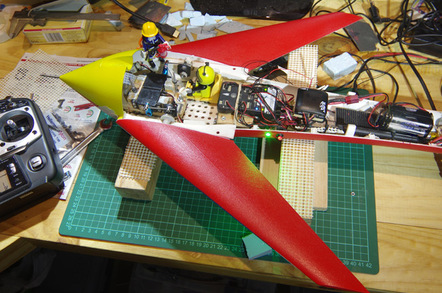 As ever, we're grateful for our reader experts' feedback on the Low Orbit Helium Assisted Navigator (LOHAN) mission, and today we have a round-up of your comments on the Vulture 2 spaceplane's cantankerous canards.

As we reported last month, the aircraft's forewings have finally been tamed, and here they are attached to the vehicle: 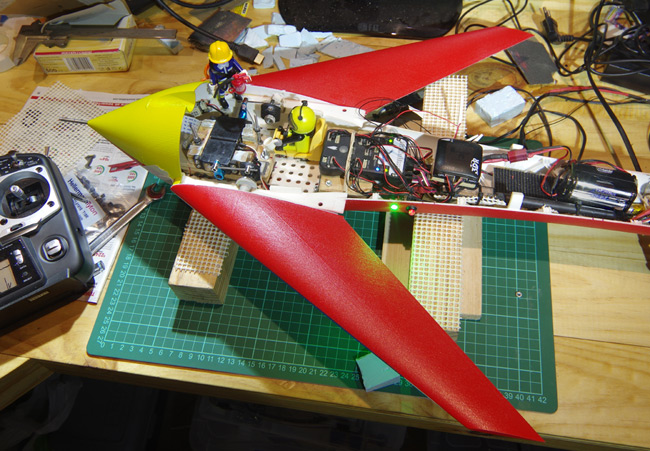 Here's a closer look at the servo linkages, with a miniature firefighter on hand lest another servo go up in smoke... 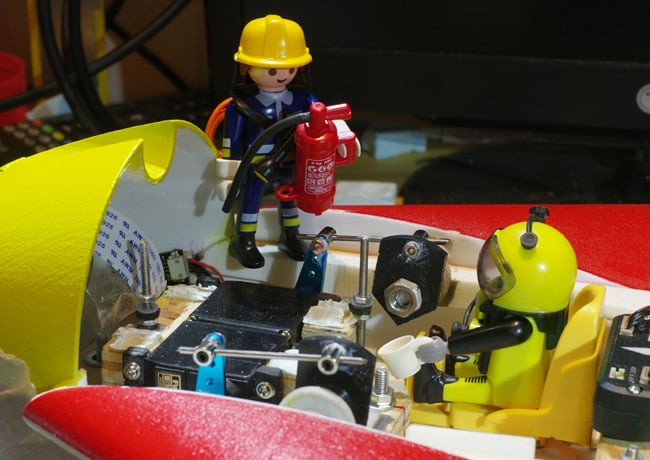 ...and for the mechanically minded out there, here's exactly how we connected the canards to the front fuselage: 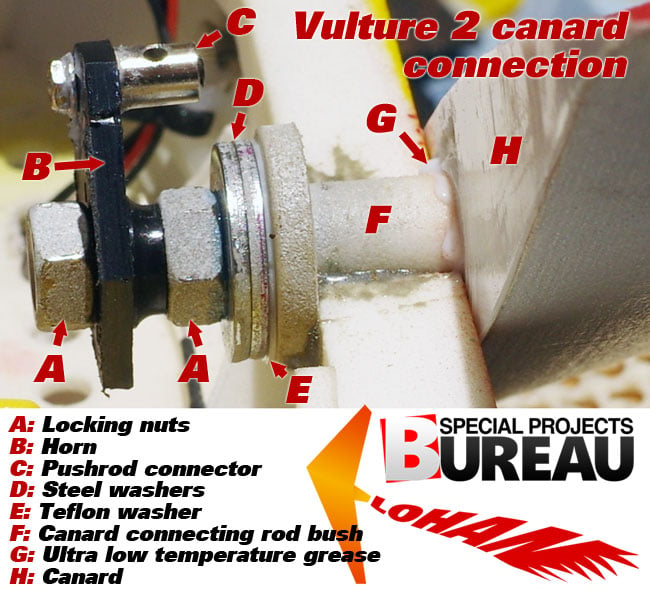 Well, we thought that was all pretty plausible, but there was no way we were going to get off that lightly. SuperTim swiftly weighed in regarding the pivot point:

I think I would have placed it further back on the canard to reduce the force required to operate the canards under full aerodynamic stress. It is quite far forward of the centre of aerodynamic force at the moment, meaning you need to really press hard to deflect it in the air stream. moving it back a bit will make that easier.

Move the pivot too far back and you actively have to manage the canard to keep it where it is as the air flow will try and force the canard to one extreme or the other. I think it should go back a bit to ease the strain on the servo, but still maintain enough force for the canard to self level back to the neutral point should the link snap.

A couple of points. The canard will not return to a neutral point if a link snaps. It will move to a point of least drag, relative to the direction the rest of the aircaft is travelling. Of course the two will vey quickly be the same as the craft goes into a vertical dive.

The second point relates to the wing bushes. They are far too short. Length over diameter is the rule for shaft bearings. Or you could have fitted three bushes. One in the centre of the craft and common to both canards and one adjacent to each wing root. If these two bushes were internally threaded , to fit the threaded shaft, the end location of the wing would have been achieved without binding or looseness.You simply arrange that at the maximum deflection of the wing, there is still an air gap between it and the fuselage. The small increase in air gap at the other extreme is insignificant. So no rubbing of the wing against the fuselage. Even under stress.

Holtsmark was also concerned about the bushes, chipping in with:

Looking at the way the canards are fixed to the fuselage, I am a bit worried about how the forces from the canards are introduced into the aircraft structure. At the very least, a lifting force will introduce severely increased friction loads on the surfaces that work as glide bearings.

If you were to introduce a shaft that could transfer bending moments (but not torque) from the right canard to the left canard, then the bearings would only have to deal with the lift generated by the canards, and not the bending loads (Assuming both canards are moved in the same direction). If the canards are used as ailerons, then the bending loads would be reduced by a factor close to 10 (using the width of the fuselage rather than the width of one glide bearing sleeve to offload the canard.

At this point, the complete redesign of the canard system was almost complete, save a couple of last contributions. Morrie Wyatt emailed:

Hi all, I was thinking something along the lines of a crank like the sketches attached. Having a rod attached to the canard passing through a slot in the fuselage into the slot in the crank so that the servo raises and lowers the the rod to rotate the canard around your existing pivot point.

Because the linkage is via the slot in the crank arm, there is no need to compensate for the arc of rod travel.

It's just an idea that "makes sense to me". 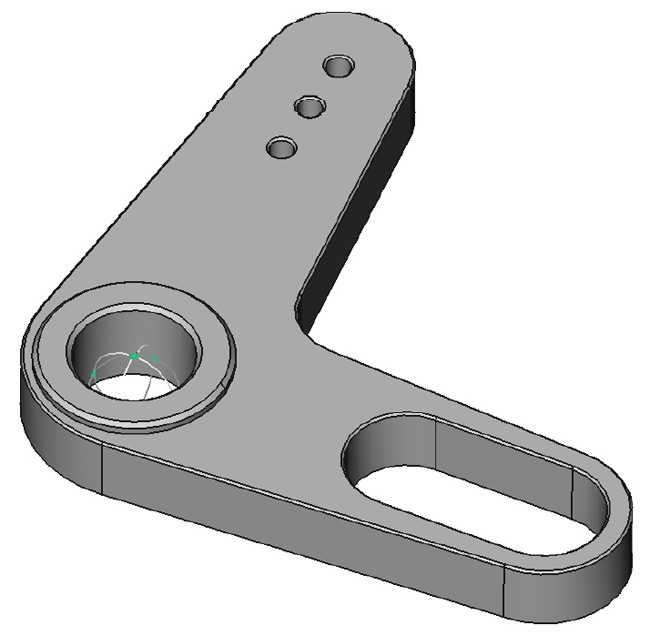 Locking nuts, high performance glue, massive linkages - all well and good, but in the end, you still got a round hole on a round bolt trying to transfer torque. In most R/C applications I've seen so far where torque is actually an issue, you either use a flattened bolt with a respectively shaped hole or, if torque really is an issue, the round hole with the round bolt for the bearing and a steering horn somewhere else on the outside of the control surface to transfer the torque.

As for the twisting, warping and subsequently blocking under load: yes, same fears here. If you can do a test flight (or even better a wind tunnel test - might ask your university chaps) under close-to-real conditions to see whether the canards will still work under high speed wind load, then for the better. But it's still not too late to change your setup:

- push through the canard axles and secure with a retaining ring (will need some rework on the canards, maybe even a new set of canards at the most)

- cut a slot for the linkage into the fuselage

Of course, this will make the pilot's compartment somewhat drafty. Oh, and in hindsight, a nylon or ptfe washer around the axle would probably have worked as well as the full size coating.

Good stuff. What really got us reaching for the brandy decanter was the phrase "will need some rework on the canards, maybe even a new set of canards at the most".

A trifling matter, to be sure. Seriously, though, there are some excellent points raised here, although we doubt at this stage we'll be able to take them on board.

Suffice it to say, we're going to go with what we've got and you can prepare your "I told you so" comments for either deployment or discrete disposal in the bin at the appropriate moment, according to the outcome.

Thanks as ever for your valuable input, as we look forward to further critiques of the mission's progress in due course. ®

LOHAN in FIGHT to DEATH with brace of cantankerous canards

'ThunderStruck' – going supersonic soon in a stratosphere near you

Vulture 2 fills beak with Pi in the Sky