Speed of light slower than we thought? Probably not

Einstein not wrong, except in headlines 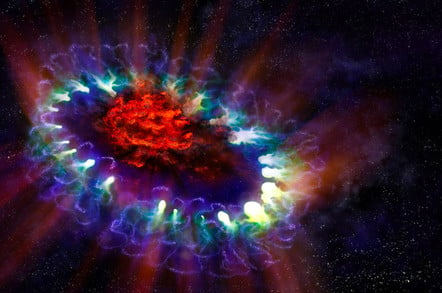 With the simple headline “Einstein was wrong”, yet another piece of questionable physics has garnered world attention.

It starts with this kind of canned statement, which originated at Phys.org and apparently arose from this uncritical write-up at the Medium-hosted Physics at Arxiv blog.

To quote Physics at Arxiv, “James Franson at the University of Maryland in Baltimore ... has used the laws of quantum mechanics to calculate the speed of light travelling through a gravitational potential related to the mass of the Milky Way.”

His conclusion, in this paper at IOP, is that both Einstein's prediction of the speed of light – 299,792,458 metres per second in a vacuum – is wrong, and light travels slower than we thought because photons can split into slower electron-positron pairs before recombining as a photon, in a process called vacuum polarisation.

How to test this? Franson has based his work on a conundrum raised by an old supernova explosion: that when supernova SN 1987A was observed in 1987, neutrinos were spotted 7.7 hours before the event became visible when photons arrived.

Since both neutrinos and photons should have arrived at the same time, Franson has decided that it's the speed of light that's at fault, rather than our understanding of supernovae – and that's given rise to “Einstein wrong!”-type stories at noted science journals The Huffington Post, The Inquisitr, The Daily Mail, Extreme Tech, and IFLScience.

The Register decided to ask an astrophysicist, Dr Brad Tucker of the ANU (whose work has been discussed here previously), who urged a more sceptical view of the study.

The basic problem, Tucker told Vulture South, is that of the two phenomena Franson's paper discusses, the speed of light is well understood and has been experimentally verified over decades, while even astrophysicists “don't fully understand supernova explosions".

“SN 1987A is the best-studied supernova ever, because of its close proximity. However, we classify it as peculiar because it does not fit into our broad categories,” Tucker said in an e-mail. The difficulty in understanding SN 1987A, he said, is one of the things that tells astrophysicists “we have a long way to go.”

He suggests that one of the oldest principles in science, Occam's Razor (roughly, among competing hypotheses, the one with the fewest assumptions should be selected), is being ignored in the rush to slow down light.

The speed of light has survived every test thrown at it over decades, he explained, but Franson has loaded his analysis with extra assumptions to demonstrate that the speed of light is wrong (and therefore, every calculation it's used for is also wrong).

A less-polite analysis at this blog points out that Franson's original paper has idled along at Arxiv for three years without much notice. Only the combination of IOP acceptance and Physics at Arxiv promotion, it seems, have elevated the paper to an international headline.

The Register also notes that Franson's scepticism about a 1:10,000 chance that the mysterious neutrino bursts were nothing to do with the supernova isn't enough of an improbability to discount the idea we don't know what's going on in SN 1987A.

For example National Geographic gives the likelihood of an individual being struck by lightning in the USA in any given year as 1:700,000 – however, that means there are more than 400 such events annually.

Which is why science doesn't consider “discovery” of a particle to be established unless the chance of coincidence is at five-sigma, or 1:3.5 million. ®