'This is not mass surveillance', insists Home Sec Theresa May 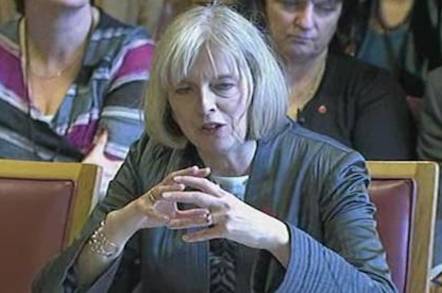 Home Secretary Theresa May has claimed "there is no surveillance state" in Britain today as she once again called for a change in law to prevent the internet becoming "an ungoverned, ungovernable space".

The Snoopers' Charter champion, speaking to dignitaries at Mansion House in London last night, did not once mention the European Union's highest court's recent ruling to rip up the Data Retention Directive - but she did allude to it.

In April, a measure that required ISPs to retain data for two years was deemed "invalid" by the EU's Court of Justice on the grounds that it interfered not only with data protection rules but also with fundamental rights to respect for private life.

The Tory-led government has expressed concern about losing those powers and is pushing once again for a change in legislation to allow spooks to massively ramp up surveillance online.

The Home Sec - with less than a year to go until the General Election - is now reduced to building a case for a Snoopers' Charter, as it's colloquially known, without being able to lobby for legislation during this Parliamentary session.

Unsurprisingly then, May has become even more outspoken about surveillance. She said on Tuesday night:

The very idea that we could or would want to monitor everyone and all their communications, trawling at will through their private lives, is absurd.

Signals intelligence relies on automated and remote access to data on the internet and other communications systems. Computers search for only the communications relating to a small number of suspects under investigation. Once the content of these communications has been identified, and only then, is it is examined by a trained analysts. And every step of the way it is governed by strict rules, checked against Human Rights Act requirements.

That is not mass surveillance.

May claimed that the blistering revelations uncovered by one-time NSA sysadmin Edward Snowden - who blew the whistle on the activities of security agencies in the UK and the US - had potential risks to national security and claimed that Brits were in danger of being "misled".

"It is important that people hear the truth about each of these allegations, because we cannot afford a loss of faith in the vital work of the security and intelligence agencies, and because we need public support and public trust if we are to win the argument about capability," the Home Sec said.

Keith Bristow, the head of the National Crime Agency, told the Today programme on BBC Radio 4 this morning that he was concerned about data retention following the ECJ ruling.

"The very real risk that we face is that we won't be able to access data because it won't be retained in the first place and that's a huge concern for us. It's vital for us to keep the public safe," he said.

Bristow, by way of example, said the NCA regularly tackled paedophiles who groom young people online by "collecting the data - not the content of what they do - but with whom they communicated and from which devices. We use that data to bring those people to justice, to prevent them from doing bad things to children."

When quizzed on the discomfort Brits feel about having their material snooped on, Bristow said: "This isn't about the general public. The data is retained by communication service providers, we have to go through a rigorous regime with independent oversight from the Interception Commissioner."

But the NCA boss recognised that the ECJ decision could not be overturned. He told the Today programme that he wanted to explain to the public what the "consequences" of losing the data would be. "Ultimately it's for legislators to consider what we might do," he added.

Arguably, security agencies may not have to wait long for such a legal overhaul. The Labour Party recently indicated that it was likely to resurrect the twice-shelved reworking of existing surveillance powers to supposedly address online threats from paedophiles, extremists and terrorists, if it wins the General Election in 2015. ®

Compared to 151 million in 2016, perhaps due to dupes rather than spy boom